We spent a very touristy day at Hampton Court Palace. 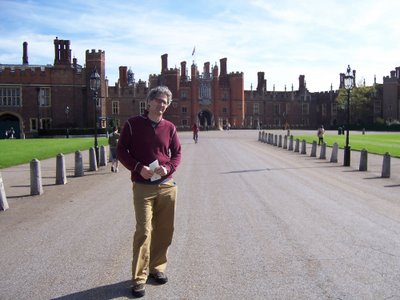 From Waterloo station (we used this station a lot on this trip and I couldn't get freakin' Abba out of my head for weeks.) it took about 40 minutes on a commuter train, then a 5 minute walk from the station to the palace. I loved it most of all because of the huge Kitchen tour. Gotta love the audio tour! 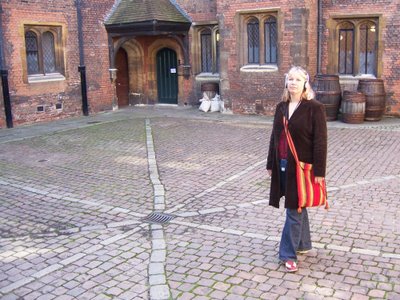 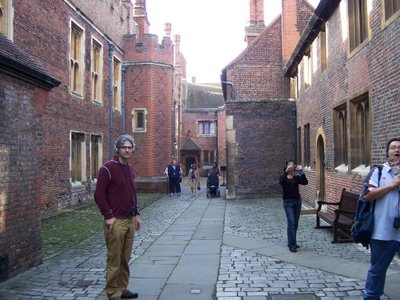 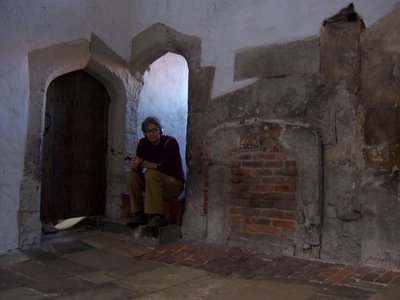 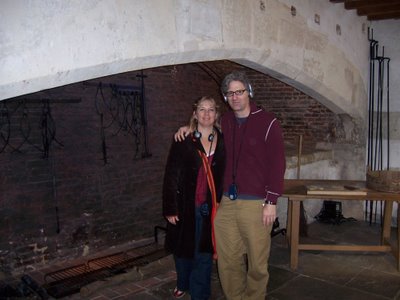 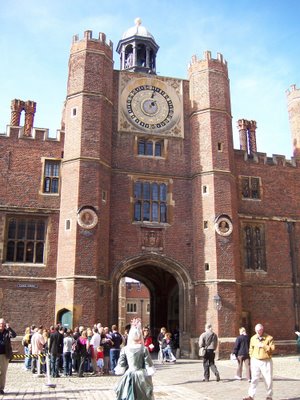 This clock reminded me of a clock I saw in a room in the Doge Palace in Venice years ago. I was with Jacquie and Wendy and we had one audio tour and I was designated listener/reteller. We were in a room with a ton of stuff and this very bizarre clock that ran backward and had all kinds of zodiac symbols on it. We looked at the clock and said, wow, what is that thing? And I pushed the audio tour and it took (what felt like) 15 minutes to get to the part where the guy said, "Now, look above the door, there is an unusual clock." And that was the end of it! 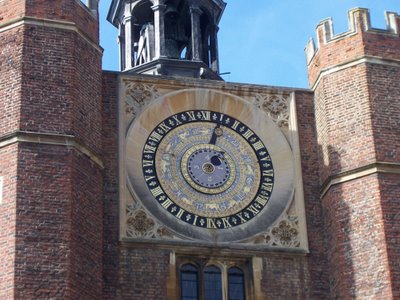 After working for a bit in London, Kurt arrived so we could start having more fun. We walked around Picadilly and St. James Park. Beautiful afternoon: 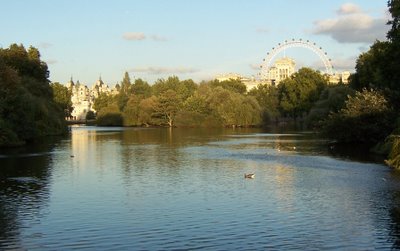 We had been to St. James Palace and while there admired the lone guard outside with his beaver hat and odd quick-step march. Well, admired is not quite the right word. Kurt was beside himself with incredulity -- what was the deal with the hat? And why beaver? And what the hell is that marching stamping action? And to top it all off, we noticed he had a serious modern fully automatic HUGE weapon. Just then, a large tour vehicle came by. Not any vehicle, mind you, a DUCK TOUR! Photographic evidence: 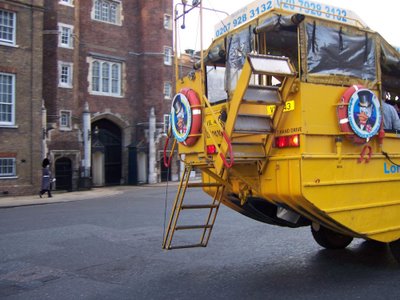 A seriously odd combination of events. And for a guy with jetlag, Kurt handled it all pretty well.

Just before the whole ducktour/beaver hat/stamping guard/full automatic weapon, I showed Kurt where the Texas embassy was from the 1840s. You may recall that Texas was its own country at one time. And being its own country it had its own flag-one of the Six Flags Over Texas. Can you name the other 5?* Here is Kurt near the site 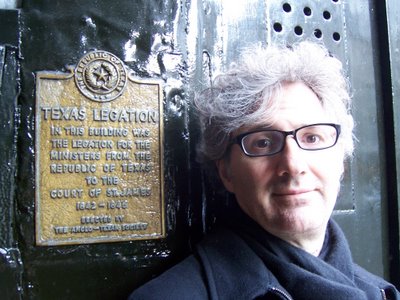 I didn't find that plaque/location by myself (or search for it). I learned about it on a walking tour the weekend before Kurt got there. I give full credit to London Walks. Every single time I have been to London, I have been on at least one of their walks, sometimes two. That night I was on a pub tour in the St. James neighborhood and it was a blast. I waited for Kurt's arrival before going on the Jack the Ripper Tour. Fascinating for the crime details but also the history of the time and place -- 1888 City of London. I HIGHLY recommend these tours if you are in London. The guides are brilliant, really know their stuff, give you great stories behind stories and take you places you would never know you could go to, little alley ways and passages that don't look like anything at all. That's where the Texas Embassy spot was, down a narrow dark passageway I would not have given a first look.

The next night we went on the London Eye at sunset. We highly recommend this tourist attraction and even more highly suggest buying tickets online because no one is ever at the online ticket machine so there is one less line to stand in. 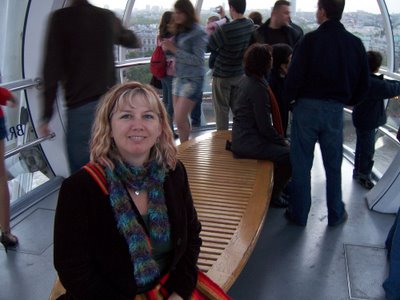 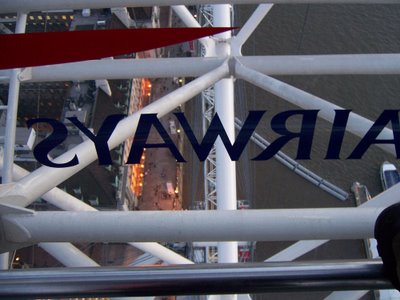 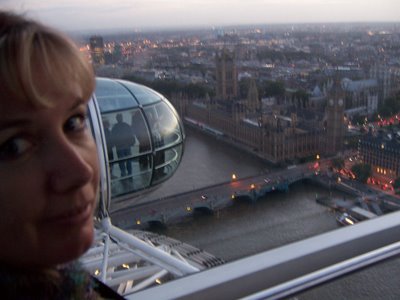 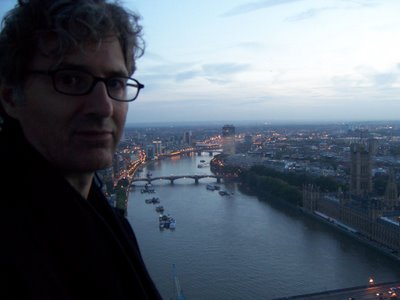 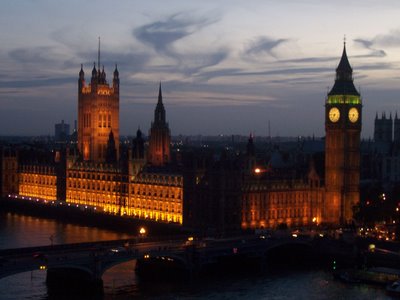 *though some folks call it a nuisance.

When I was in Puebla, you may recall I learned who Banksy was from Paddy. While I was in London, I saw three actual Banksy...um...installations? The first one I couldn't get a picture of (and couldn't find it on his website) but across from my bus stop in the morning was this one: 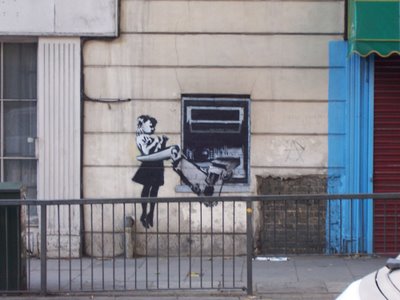 Then after dinner with Paddy and his lovely wife, he showed us this one near his house: 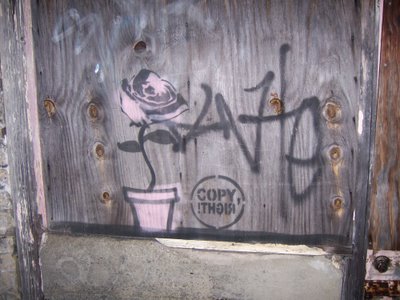 (The handwritten portion is not part of Banksy's work.)

Then Kurt and I were in Paris for a few days and within a few blocks of our hotel we saw these three...um...installations. (This one is particularly funny/relevant since it is of a mexican wrestler type -- ¡Lucha Libre!) 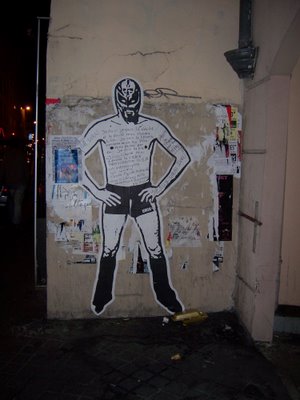 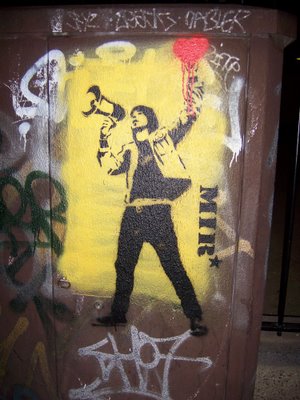 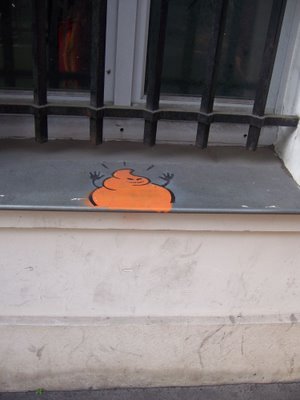 If I owned property and found stuff like this on that property would I be mad? I don't know, I guess it depends on what it was. Scrawled tags definitely turn me off, but these stenciled, more graphically designed images are interesting to me. I'm a fan of outdoor public visuals. When I first moved to Los Angeles, I was blown away by the billboards. I loved them. It made me feel like I was in a city after growing up in essentially a small country town. I still love well done, well thought out billboards. I also love the advertising in the undergrounds in London and Paris. They can be crap, as all advertising can be, but sometimes they can be genius.

My Favorite Street in London (so far...) 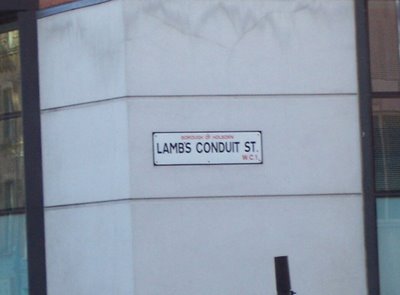 I mentioned bus #19 before as my daily ride, though I can also take the #38. But I prefer the #19 because it is always a Double Decker. The upstairs usually always has a seat open (the front ones are most fun). #38 is a Bendy Bus and always seem cramped and full. They also apparently catch on fire from time to time.

On my commute to and from my hotel here in London, there are six

On my way is this restaurant: 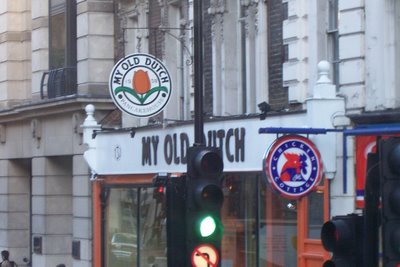 Which makes me smile every morning because it was one of the first places we ate in London on my first trip in 1989. Backpacks, youth hostels, shorts and sneakers. John, Katie, Vince and I had such a great time on our two month adventure, starting in London.

Part of my commute looks like this (from the top of the double decker bus):

My favorite place in London right now for a quick and (relatively) cheap breakfast/lunch/snack is Pret a Manger. 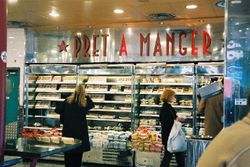 Their sandwiches and salads are all made on site, daily. All leftover food is given to charity at the end of the day so none of it goes to waste. They use fresh/organic ingredients and use recycled cardboard as often in all their packaging as possible. Everything is delicious and they are EVERYWHERE.

But here's the problem. McDonald's owns a 33%, non-controlling share in Pret. And I don't patronize any fast food anymore except for In-N-Out Burger after reading the book Fast Food Nation. I quit, cold turkey, about 4 years ago. It hasn't been very hard (and I should have quit a long time ago) but every once in a great while, I have to give up something I really like. Baja Fresh, for example. I loved eating there, but then Wendy's bought them. Bye Bye Baja.

Any input would be appreciated.

In the mean time, I will try Eat.

I was told quite clearly by two friends that I HAD to go to Wagamama. 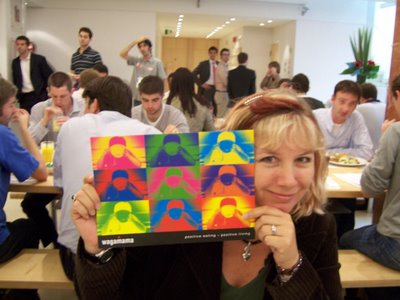 So I went and it was delicous and I'm sure I'll go again as the place I'm working is just a few short blocks from this Wagamama.

UPDATE: I was mortified to realize that I didn't give proper credit to my regular Mexico City photographer, Paddy Eason, for this lovely London photo of me. Thanks Paddy!

Today's one line forecast: "A wet night for many."