So it's been almost two weeks since we started the Spring 08 Garden Redo and lookee here, the tomato is already twice as big! If you'll recall (andc click here) from one of my earliest posts re: the garden the tomato plant was only as high as the first rung on the cage around it. But look at it now! 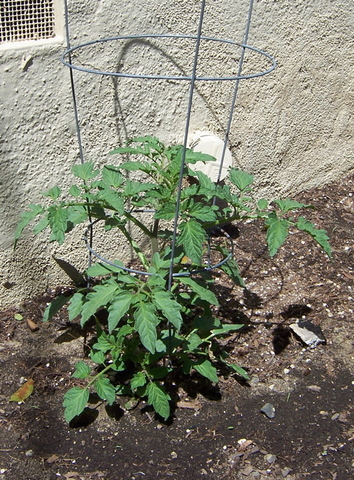 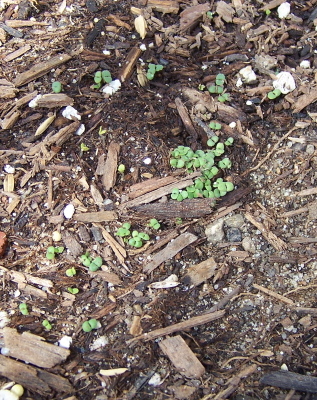 And the thyme is starting to come up. Look at the sweet tiny sprouts coming up... 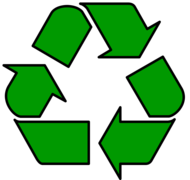 We are not overtly green, but we are becoming more so. There is always more stuff in the recycle bin than in the rubbish bin on trash day. We have reusable grocery bags that get used for 95% of our trips to the grocery stores. I also carry super nice fold up bags in my purse (thanks Kur and Mare!) for other purchased items (books, gifts, etc). We have six CFL bulbs in use around the house, though I'm not ready to use them for reading lights in our bedroom. We rewash our ziploc bags and when the current stash we have are finally so well used we have to toss them, we will get more long term/reusable storage containers (more than we have now, I mean) and not buy any more bags.

But the most surprising green thing we've done lately is not to use paper towels. None. Not a one. We ran out about two months ago and never bought new ones. At first we just dealt with the fact that we were too busy to go get any (usually bought in bulk at Costco) and used old rags and dishtowels for clean ups. After a week or two we both realized, without talking to each other, that this was no big deal. When we finally commented on it to each other, we decided that we didn't need to buy them ever again. And we won't.

We went to our tax guy the other day and calculated that I've only driven about 4000 miles in my car last year. Apparently the average is 12,000-15,000 miles per year. Yes, I work at home, so that helps a lot. My car is well maintained and gets okay gas mileage for a 15 year old car with 175,000 miles on it. (Acura!) But soon I will be selling it and will have to share with Kurt. I've already begun walking to the grocery store and have bought a handy cart for when I have LOTS of groceries to buy. I've figured out local bus routes to places near home and will try to share rides as often as possible.

In some ways, green by omission is so much easier and with each new habit we pick up, the next ones will be easier and easier.

Everything is still in wait and see mode and as an action oriented person this is a challenging place for me to be.

My stepdad is still in the hospital, some days he improves slightly, some days not at all and seems to get worse. He's been there for three weeks now.

My sister is waiting for a few more appointments with various doctors. But that won't be for another ten days or so.

My mother in law is still in the nursing home, still fighting off the C. diff which apparently is quite tough to get rid of. I hope her latest rounds of antibiotics work so she can finally go home. She's been in the nursing home for over a month and is really unhappy there. Who wouldn't be?

The good news is, we found a place for her to live in Los Angeles, big huge thanks to Sarah! The place is perfect, very close to us (a 10 minute drive), brand new, very pretty, full of light and nice people. Best of all, it is within the budget range we needed. I hope she can move within a month or so. She just needs to get well and stay well and improve her strength and build up her appetite.

Kurt is there with her now and his brother is flying in tonight and I'll be there tomorrow. Tomorrow is her 90th birthday and we have ordered a cake for her. I hope she's home for it.

(After writing the previous post, I had a hankering for coffee, so I just made myself a cup...)

One of the sites I found online while googling Postum is Javaholics Antique Coffee Mills. Mostly it is about just what the title says -- antique coffee mills. However, they do have some old advertising for coffee and coffee paraphernalia. The one that caught my eye is this:

Something about "Wedding Breakfast Coffee" seemed wacky. That is a really niche market to be selling to! In that image of the bride and groom at breakfast (click for bigger image) there seems to be a lot of stress. If I were in my white wedding gown, I would probably be stressed about drinking and spilling coffee too. Yikes.

After 100 years, Kraft is no longer making Postum. Some of you are saying "WTF is Postum?!" I only know what it is (was) because my stepmum, Diane, bought it from time to time. It was a coffee substitute, made from roasted grain and caffeine-free. (What is the point!?) I remember having it when we had to get up early at my dad's house for special occasions, like Easter Sunrise Service. The grown ups had coffee to get them going toward sunrise and us kiddies were given Postum. While I don't remember liking the taste, I'm sure I felt grown up having a "coffee-like" beverage. I do remember clearly not liking to get up for sunrise service though. (Sorry Diane!)

I learned about Postum being no more on NPR the other day. You can listen to the full story here. You can also hear reader letters in response to that story right here.

I had forgotten about it but yesterday I was in the drugstore and overheard a woman ask a salesperson if they sold Postum. She was older, probably in her 70's and with an older friend. I stepped over and said, "I'm sorry to tell you but Kraft doesn't make it any more." She didn't seem wildly disappointed, but she did tell me how much she really liked it.

Amazon still has Postum listed for sale but with the ominous phrase:
Availability: Sign up to be notified when this item becomes available.

I also found this POSTUM conversation on the Kraft site. There are some desperate people out there! Someone started the BringBackPostum! blog.

Did you ever drink Postum?

Sunday (day 6) was another day of rest. My back and behind were sore from all that pick/shovel work the day before! Yowza. I did water everything well to make sure they all get off to a great start. I've seen the humingbirds coming and going and hope the butterflies come soon. 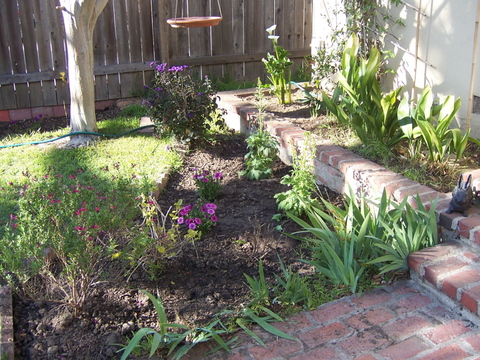 Today I launched the final major assault on the one section that still needed clearing and planting. Luckily this section is under a partial shade sail and that I had my BFH on because it was HOT and SUNNY. You recall the "before" picture I'm sure, so you can see how much work I did today. Whew.

All that is left is to tidy up some overgrown nasturtium and impatiens out front and then the garden only needs watering and occasional weeding. Yay!

I'm very pleased with our work and enjoy watching Kurt pad around in his robe and slippers in the morning, looking at all the new plants. 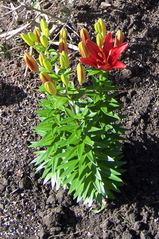 Day five dawned beautifully, especially when I noticed that the asiatic lily decided to open up and say hello. All the worms had made their way down under and are now making mulch for us and living lovely wormy lives.

Instead of tackling the area I pictured yesterday, I decided to do a bit less and plant the orange flowered ice plant out front on the hellstrip (the area between the sidewalk and the curb). I have many plants that don't require much care out there (lantana, freeway daisies, lambs ear, aloe, iris, etc) but one end was neglected so I bought 1/2 a flat of the mini iceplant and whaled away on the grass that had over grown the spot. That was some work. Whew. Here is the final result (They will perk up in the sun tomorrow, I promise.) 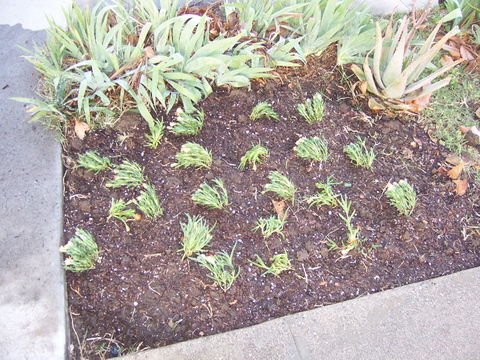 For comparison, here is a section that I didn't clear of grass. I also planted four different kinds of sunflowers in various areas around the house. I chose all tall varieties and planted many along the hellstrip for all our neighbors to enjoy. Can't wait to see this. 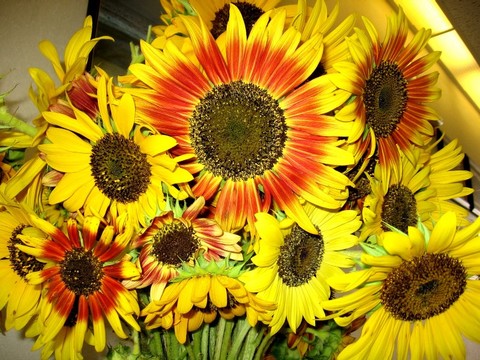 The sprinklers got their first work out in months. I adjusted a few and found some that aren't working and will need to make sure the automatic flow is not too much.

I'm happy and tired and already have seen a hummingbird eyeing some of our new plants. Hooray!

(Image of sunflowers from Wikimedia commons.)

I also bought red worms to put into our fields. The instructions say to "release" them in the evening after watering. So we did. 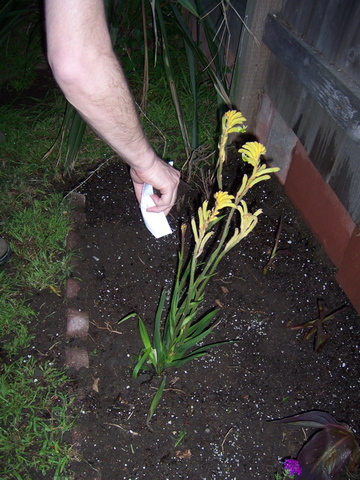 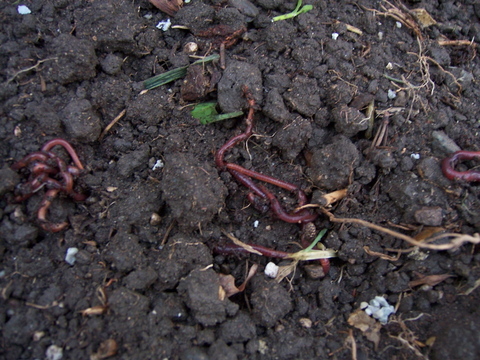 Back to work in the garden, with much help from Kurt who wielded that pick like nobody's business! Thank you Kurt! He cleared away a long stretch along the back wall so I could plant a back row of canna lilies, then a front row of verbena and kangaroo paws and some rosemary on the far left.

We cleared away a section right near Kurt's office door and planted lots of pretty flowers and shrubs. Kurt will have a great view of the changes all spring long. I also planted summer squash and some mint in this bed: 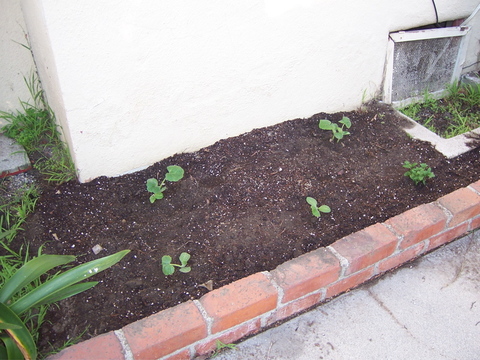 As well as zuchini and more basil in the other bed (not pictured.)

Tomorrow's afternoon will involve this area and all the grass clearing and tidying we can muster before designing where each pot of pretty flowers go. I bought plants for butterflies and hummingbirds and look forward to their visits in the coming months. Now my back and legs and hands are quite fatigued! I think a glass of wine is in order...

A day of rest. As Betsy commented in the previous post about spring planting, working in the garden can be very good exercise. Yes it is! And when you aren't quite in shape for it, it can be quite tiring! So I'm giving my back muscles a break today and just watering. Then tomorrow, more field clearing and veggie planting!

Quick snap of some flowers waiting their turns. They are so colorful they blew my camera's mind. 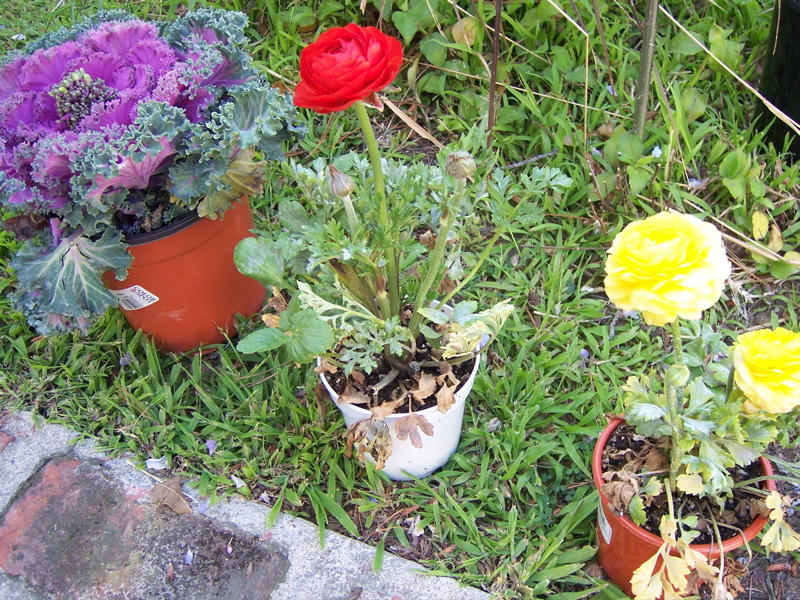