Kurt unloaded his backpack after driving here from Texas. I found the aftermath amusing in it's strange randomness made even better by the can of cat food. 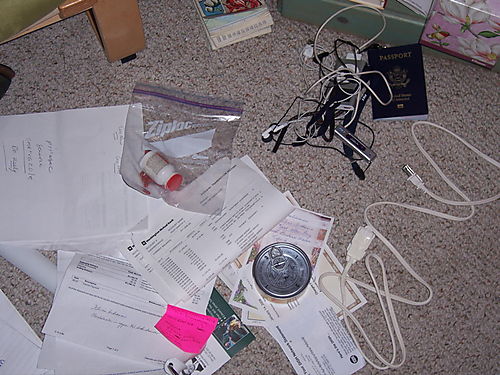 As I mentioned, Dot and Kurt drove along with her two cats, Dynamo and Squirt.  Squirt is not quite my style of cat, he's long haired and cranky. 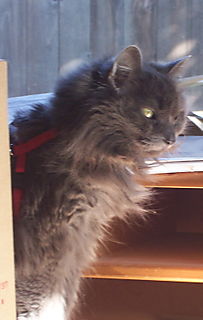 And he's a one woman cat, really liking Dot and only Dot.  He mostly stays out of the way.
But Dynamo -- Oh boy, he's a cat I adore.  First of all, he's HUGE.  And just look at that mug! 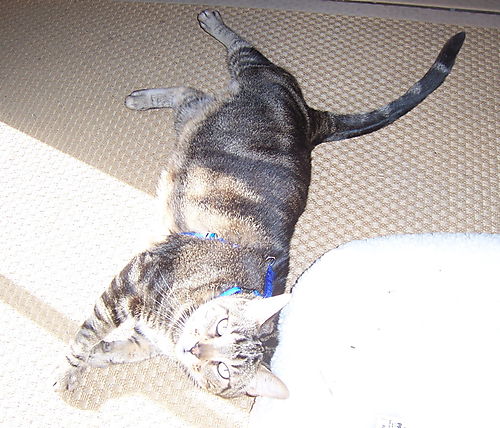 (Sorry for the blown out image.)
He's about 16 pounds and a big love bug.  He flops right over and wants you to rub his belly, then just lies there, legs splayed out for another hour.  Apparently he sat in Kurt's lap while they were driving across the country.  Kurt has started calling him "Big Mo."

Kurt and his mom got in last night, they made great time on the road.  Dot even got to drive for about 50 miles somewhere out in the middle of the 10 in the desert.  She was so happy to have been able to drive for a while as it will probably be the last time she drives for a long time, more probably for ever.  Did I mention she's 90? Her cats also made the trip very well, apparently.  They are out in Kurt's office, hiding, laying low -- literally -- and if you have cats, you know what I mean.
Dot will move into her new place tomorrow afternoon.  The movers arrive at noon.  I'll supervise the placement of stuff (we worked it all out with a floorplan in Texas) while Kurt and his mom either play cards or hang out in the large living room area near her apartment on the third floor.  Then she can sit in her barcalounger and rest while we unpack dishes and books and things, figure out where to hang pictures, etc.  Moving IN is always much easier than moving OUT, I find.
Last night at dinner she asked "How would you ask more than one person if they want something?  Would you say 'Would you both like...'?"  We were confused and asked her why she was asking.  She said "I figure I can't say "Y'all" anymore."
She was quite serious. 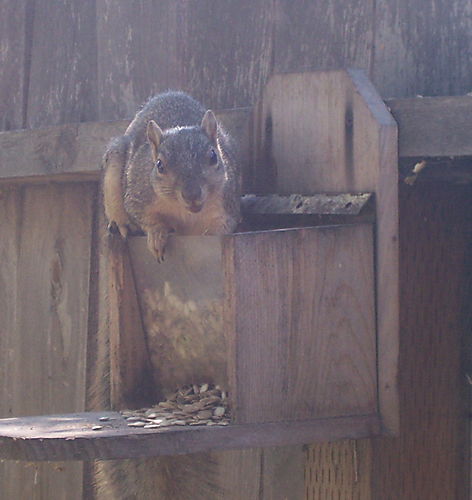 Our backyard neighbor, seen here, was following me around as I set the sprinkler out this afternoon.  He seriously wanted me to get his food and now please.  I was talking on the phone to my mom and this little dude was about 2 feet away from me on the fence.  I could just hear him:  "put the phone down and go get the food!"  So I went to the office where the food is and he followed me to the door, trying to point out where we keep it, no doubt.  I got  the food, still talking to my mom and then held out a handful, resting it on the fence.  He ambled over and ate out of my hand!  OMG!!!11!  His leeeetle tongue was licking my fingers as he gently took one seed after another.
My very own Cute Overload.

I finally got home at 9pm last night.  I watched Top Chef on the tivo to wind down then slept like a rock until 6:30.  Oh, there was a moment when Bunny had to come and snuggle under the covers with me.
Bunny. 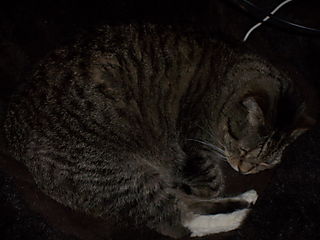 Bunny is my prize for all the hard work I've been doing.  I feel like I need a medal or something, dealing and planning with Jen's funeral, working hard to help Dot get moved out.  I hear myself say that, like a pouty kid, wanting attention and appreciation.  I'm clutching at a reward because it will make me feel better.  But it really won't. I'm grasping at "feel better" straws all over the place, and keep slipping back to the bottom of the haystack. There is no real comfort. What did Cynthia say in her email yesterday?  Here it is:

I remember reading a book on grief that said our losses produce a great amount of energy and when we "deal" with the emotions "incorrectly" we store that energy inside of us. A healthy steam kettle releases energy gradually - a goofed up one explodes.

I let some steam go. I cried most of the way back on the plane yesterday.  I almost started in the taxi on the way to the airport.  Kurt and his mom had already left on their road trip and so it was just me at the house and as we backed away, I felt this transition deeply.  I have no idea about how Dot feels about it, she's not of our age of expressing emotions about these kinds of things.  And while I didn't have any real attachment to her house, just a few Christmas visits, the bigger idea of it all sank in.  I know it was enhanced by all the pain around Jen's transition too.  Jen's transition is also my transition, everyone's transition as we figure out how to live our lives from here on without her there.
I've been wearing two Live Strong yellow bracelets for the last few months.  A friend of Kurt's who I had never met came over and saw them and asked "oh you have two bracelets on, do you know someone with cancer?"  I said "yes, I do.  Well, I knew someone with cancer."  It's a grey area these days with verb tenses.  I have a sister, Jennifer.  I had a sister, Jennifer. 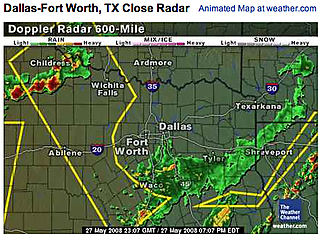 And there is not a cloud in the sky now.  But our aircraft is still in Austin for some reason.  Holy crap. Kurt and his mom will be out of Texas before I am and they are driving!  The computer says we will be departing at 7:40pm but if the plane is still in Austin, I'm not sure how that will work.  I would rather they made cancel the flight and make us stay overnight so I could just head to a hotel and put my feet up.
I went to ask the guy out front about the status and he said in fact the plane would be here from Austin at 7:30 and we would be departing at 7:50...so we'll see what happens.

Well, the weather is getting better, but my plane is still in Austin, apparently. My flight is supposed to leave in about 25 minutes, but there is no sign of an aircraft, so I'll go check with the dude...no real news.  There is another aircraft at our gate, so clearly we are not leaving at 5.  Oh well.
Nothing more exciting than to read my "live blogging" from my delayed flight, huh?

Stuck In An Airport -- Dallas/Ft. Worth 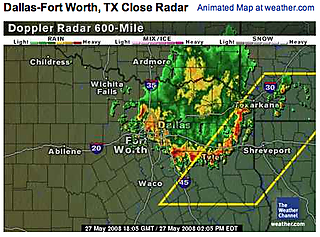 Here I am in the United Red Carpet Club at the Dallas Ft. Worth airport waiting for a) the weather to clear and b) my plane to arrive from Austin where it was diverted due to the weather here.  (See left.)
I got really spoiled in 2005 and 2006 when I had bought a year membership in the Red Carpet Club in anticipation of traveling back and forth to Virginia while working on John Adams.
All that changed and I thought that the money was wasted, but as it turned out, Kurt and I ended up traveling so much in 2006 that it was well worth it in the end.  When we went to Montreal for a wedding in June 2006, we flew Air Canada and got to hang in their lounges at LAX and in Montreal.  Must say, the Air Canada lounges were FAB-U-LOUS!
I am fortunate that I can be here in the lounge and while a delay is a drag, it's really not that big a deal.  I have nothing scheduled at home and it all really comes into perspective as I sat for a while near the gate where the charter plane that flies the US Army had arrived.  There were tons of Army personnel waiting around, waiting to get back to Iraq.  I spoke to a nice man who was headed back to Mosul for another five months.  He had been home for two weeks.  What is a delayed flight to LA in comparison to that?
Every time I fly through Dallas, I come face to face with the war as this appears to be a major hub for military transportation. The war is so far form a reality in my every day life and it's such a direct reminder to even just see people in uniform, heading to Iraq.

The Movers Have Gone

We are sitting in the kitchen with the one smaller table and the four "unwanted" chairs.  We didn't have to clear out the whole house so there are still some plates and furniture -- still beds in the guest rooms, thank goodness.  (Though to be honest, a hotel room wouldn't have been unwelcome...)  The movers were fantastic, nice, friendly, and so helpful.  (If you need a cross country move, I have the guy for you.  Seriously, Chuck is great.)  Kurt's mom is of the old old school/stoic variety so there isn't much chit chat about the house she's lived in for 35 years being almost empty and on a truck heading west.
Now we are ordering thai food for our last hurrah.
Hurrah! 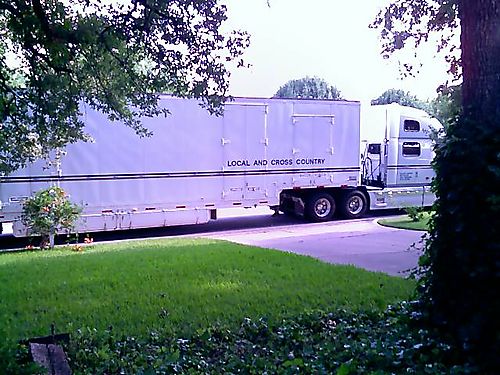 While we didn't move the whole house, we did move about 5000 pounds of stuff and it all fit in that first section above the wheels, from where it says "Cross Country" to the front. Amazing how much space in a house is just air.  Though I'm grateful I didn't have to pack any of the stuff myself!  We did plenty enough clearing/goodwill delivering and throwing out before the movers came.

Back in March when we were here celebrating Dot's 90th birthday, I took photos of the lamp post with a vine growing on it.  I thought I had posted about it, but I never did.  Things were just a bit too hectic back then.  But here it was in March in all its stick-like glory (in very overcast lighting): 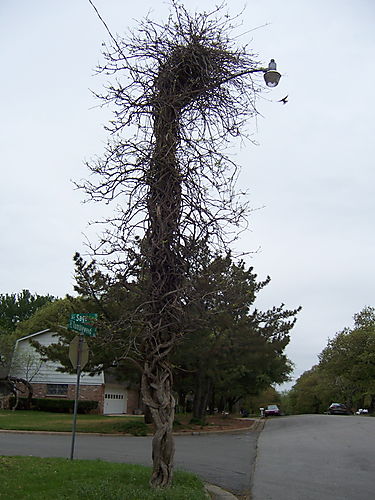 And here it is in all it's full bloom spring mode: 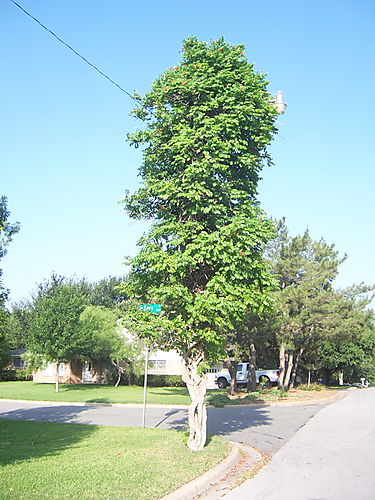 Somehow I like the stick version better.  More dramatic.