Over on Metblogs Los Angeles we have a certain type of post regarding "Parking Tards."  Mostly they are found in Trader Joe's parking lots, or similar places where parking is at a premium.  But what makes this numbnuts pretty ridiculous out here in Texas is:  ALL THEY HAVE HERE IS SPACE!  I mean look at the size of those parking spots! 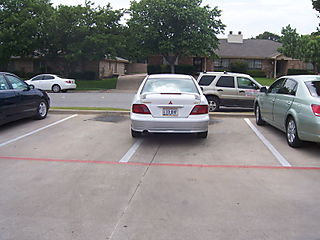 I have found in Texas there is no such thing as a "compact" space.  Seriously, I think I may have seen one or two in all our visits here over the last seven years. Unbelievable.

Wow, I'm tired.  I feel like I'm really only about 60% here.  We have been through most closets and drawers in Kurt's mom's house.  We have taken a few loads to Goodwill but it's really amazing that while she's lived here for 35 years, there isn't that much to give away or toss.  Plus the place she's moving into is pretty spacious for a 1 bedroom apartment.  The bedroom is actually slightly bigger than her bedroom here, so most of it can go as is.  Nice.
So much is going on in my heart and head and body.  I've eaten way too much ice cream, though it is hot here (really a valid reason) and I did have 2 large servings of green salad at dinner and fruit and yogurt for breakfast....so it's not all bad.  Part of me wonders if it would have been better if moving Kurt's mom happened later, but then again, it's not like I would be over feeling so much grief about Jen.  There is no "good time" for anything right now.  It's amazing.  I keep dreaming about Jen, keep seeing her and wondering why she's there when I know she's dead.
But Texas.  It is a distraction as we drive around.  There is so much space that there are acres of shopping centers that have 1/2 of the stores "for lease" and the parking lots are all almost empty.  We went to a sporting goods store late this afternoon and it was just barren, thought stocked full of brand new stuff and with plenty of staff to help, but there was no one there.  It was like being in a post-apocalyptic movie. Strange place. I guess that people build, people come for a while, then they push further out and build more, leaving the remnants behind, huge parking lots and empty stores.  I don't like it much.  Maybe I just don't like much of anything these days.
Sleep.  That's what I need a bit of.

The fire near Jen's is being contained and so the evacuation orders are now lifted and the Callahan's are back home.  Thank goodness that has passed and hopefully the fire will be put out today.

So here in Texas, with Kurt's mom, I "made" dinner tonight.  Basically we are clearing some stuff out of the freezer in anticipation of moving, but it would not have been unusual to have the same dinner if we were just here visiting for no other reason.  We had:  Kroger brand frozen breaded tilapia fillets (425 degree oven for 25 minutes) and Campbell Soup frozen premade (premade!) green bean casserole (375 degree oven for 60 mintues.)  Hilarous.
Yes, I have made my share of frozen microwave meals before and in my childhood put away many a piece of Banquet fried chicken (better cold the next day).  But we have been eating so fresh and green and non frozen lately that it was a shock to the system.
Oh and Dot has a large vat of "Texas Iced Tea" in her fridge and Kurt kept saying "it's authentic, you should try some!"  Ummm okay.  So I tried some.  It's iced tea that already has sugar in it.  Woooo!

There is a fire burning near my sister's house.  They live in the country south of Santa Cruz.  The fire started this morning and apparently the wind is really high, making the fire hard to contain.  My niece said, about 45 minutes ago, that they were being evacuated.  I think the fire is not so close to their house, but there are so few roads in and out, they are getting people out to be very safe.  Good idea.  I told Grace to yell at her mom to blow the fire back. She said, "I'm totally yelling at my mom not to let the house burn down."
Perish the thought.

If You Don't Have Anything Nice To Say

You may or may not have noticed that I have barely mentioned my stepdad's condition since I've been to Maui and back.  His physical condition is better than I expected, though he is 20 pounds lighter and fairly weak.  But he walks on his own, does small things around the house as he normally would.  He sleeps a lot more and needs to rest a lot more, but overall, seeing him was not such a shock.
That's the physical report.  The rest:  his spirit, attitude, etc....let me just say that while I was home for seven days, he never once mentioned the death of my sister to me.  Never said sorry, never expressed sadness, nothing.
So that is all I have to say about that.

In Texas For The Big Move

I flew in last night and we began making lists -- okay, it was me making the lists, that's what I do.  That's what got me through Jen's funeral planning.  There is much to do before the movers come on Monday but the good news is, Kurt's mom is on board with all the planning and is looking through her clothes and costume jewelry, sorting things and deciding what she will take and what she can store or give away.  We keep reminding her that there is plenty of room in the moving truck and that since all the things stored in her chest of drawers can come just the way they are, no need to get rid of stuff now if she doesn't want to.  But heck, she can do what she wants.
Kurt's mom also keeps saying she just doesn't feel any stronger, feels like she's getting weaker.  All this as she walks unaided around the house, making breakfast, feeding animals, talking on the phone, doing all the things she normally does.

So now that we are up and showered, we need to jump on the list.

And Oldie And A Goodie 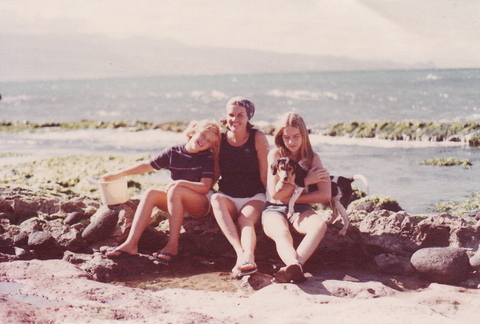 Me And Jen, Slightly Less Way Back When

And lo, five years later it was my turn. Jen and Peter had just recently gotten married. 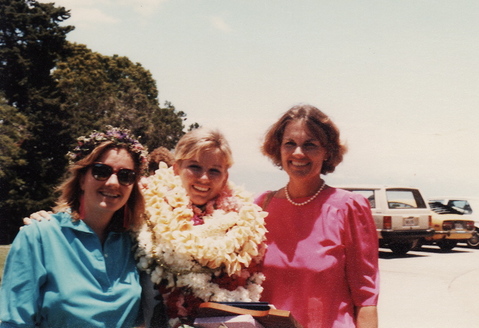 So glad I got out of that awkward phase...

Quotes From My Emails

I put a quote at the bottom of my emails, in my signature line. My most recent one was:

"A year from now you may wish you had started today." Karen Lamb

Real Simple sends daily inspiring quotes and I received the above on the day before Jen went to the ER and found that the cancer had come back big time, March 15. The sudden in your face-ness of "life is short" became very clear over the whole weekend in talking to Jen and that quote made me realize that I better get my ass in gear to do the things I want to do. It's already been two months since then.