Where Will I Be Next Week?

Still waiting to hear if I got the job that would take me to London next week for (potentially) four months.  The job would be an A-list movie (do I ever work on anything less?) and would be a great experience to live in London not to mention get paid well to do so.  Yes, there would be actual work to do and it does get challenging.  But this time I would be able to hire a coordinator and that is very appealing. I have started a list of all the things I'm going to need to get this week (in a mad rush) to take with me, including, of course, the BFH that went to Mexico.  I have also started thinking that if we have weekends off (which would be great, but I can't count on it) there are so many places to go.  Bath for one. Plus, figuring out when Kurt would come over and spend lots of time.

But I don't have the job yet.  Just waiting for the phone to ring.

Last week was busy with a quick bidding job, plus Kurt's brother and sister in law were in town for three days to see where Dot is living and to have a visit.  We played a lot of Uno and Wii.  Dot loves the bowling on Wii.  They all went to the LA Zoo on Friday while I worked and they had a good time.  Apparently the Snow Leopard was right at the front of his cage.  Sorry I missed that.

Today I'm working a little bit more, then having dinner with friends.

I can't quite focus as I'm waiting on the call that will tell me exactly what I will and will not need to be doing this week.  Either shopping and packing and buying books on London or none of that, but looking for another job.

This video made me so happy. It's just joyful. Who couldn't use more joy?  It's almost as good as watching baby lions all day.

Where the Hell is Matt? (2008) from Matthew Harding on Vimeo.

You can read all about Matt and see more videos on his website.  (I liked "Dancing 2006 Outtakes".)

Through the magic of the series of tubes and random group emails from friends of friends, I saw this today and it made me laugh. The website it came from (and a few more photos) is here. 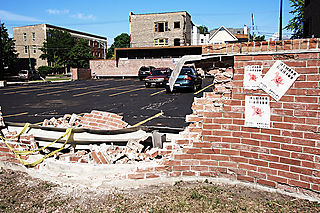 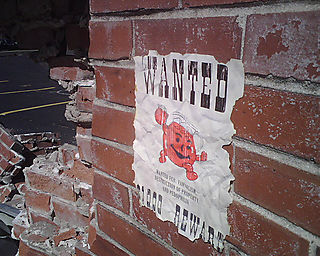 We never really drank Kool-Aid when I was growing up, too expensive.  What did we have?

You said it, Betsy -- MALOLO SYRUP! 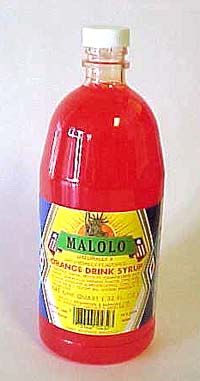 But not this manini size, the big gallon economy size!  Can you feel the stickiness between your toes on your slippers?  Thought you could.  The ocean was so handy for moments like those.

When I googled "Malolo Syrup" a link to Lee Cataluna's column in the Honolulu Advertiser came up.  It's a must read for you keiki o ka aina.  Here's a taste:

In the late 1970s, the plantation favorite "ice cakes," called "hard ice" in some circles, made a comeback among Hawai'i kids, particularly in towns without shave ice stands. Kids bought the frozen Malolo-and-water paper cups from the school cafeteria or made their own (kid recipes usually have a greater syrup-to-water ratio) at home.

The cups were balanced along the door racks of the outside freezer. You couldn't line the cups on the wire shelves because they would slip between the cracks and spill everywhere, and who wants to spend play time freezing your fingers, scraping up pink ice from the bottom of the Kenmore?

Besides, there wasn't enough room on the shelves between the slabs of pork from Uncle Sammy's last hunting expedition and the bags of frozen black crab your neighbor proudly shared from the last camping trip. You had to close the door carefully and make sure your little brother didn't "check" too soon or too often.

Saturday mornings I would get out my frozen "juice" and scrape that giant ice cube until it was slushy, watching cartoons sponsored by Kool-Aid.

If you need some Malolo syrup, for old times sake, you can buy it here.

There were so many things to take pictures of, so much color, my mind was being overloaded.  And since I was in a foreign place, I wanted to share what I was seeing.  The emails would have been gigantic with all the pictures, so I figured I would try out the "blog" thing.  My first two posts are about color and about me and my BFH.

It turned out to be quite an intense summer, my father dying, being away from Kurt and home and friends and family, though I did make new friends.  When I got home, I didn't want to stop writing and observing and taking photos, so I continued.  2007 was sort of hit or miss, though I did get asked to write for LA Metblogs. One of my resolutions in 2008 was to write more on the blog, little did I know how much writing there would be about Jen.

I'm glad to have this outlet, glad to share what I see and feel and think.  Thank you all for stopping by over the two years and please keep coming back.  My goal/dream/plan is to keep making it worth your while.

Mr. Locust was just chillin' in the 90 degree weather on Sunday. Chillin' on the sunflowers that have grown about 8 feet tall in our backyard. 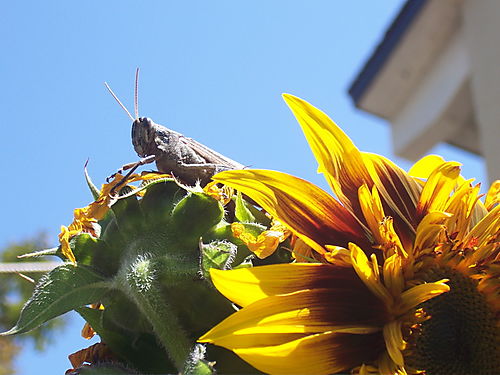 Did you know that locusts go from "solitary" to "gregarious" and when they do, they change color?

Grief sucks. I don't want to do it anymore. I'm all set, thanks, I want to be done now.

But I have no choice. Technically I do have a choice, but that would mean choosing to pretend I'm not grieving and that is impossible for me. And anyway, in all the stuff I've been reading about grief, avoiding it is the worst thing you can do. No matter where or when you set the heavy load down, thinking it will be better, at some point you must pick it up again. It only gets lighter as you actually experience and live through it.  But you can't rush it either. Frak.


All week it's been metaphors, so much so that it became ridiculous to me and I kept laughing.  No matter what I wrote (journal or email or online) or said, it always came out in a metaphor and felt silly.

It's like a roller coaster.  All the ups and downs -- huge ones at first, then not quite so huge, then they will get smaller, though not without a few breath taking surprise twists along the way.  But as I wrote this I realized that this roller coaster was more like The Giant Dipper at the Santa Cruz Boardwalk. Most roller coasters start with that first big up, with all the anticipation before the big down.  The Giant Dipper starts you off in a pitch black tunnel and as you prepare for that chunka chunka chunk chunka chunka chunka of the first big up, you go straight DOWN.  Then you start the big climb up the first real hill.  Yeah, that's what it's like.

It's like a waiting room. There is somewhere to go, but I'm not sure where. There is no posted schedule.  There are people to help, but they are free to come and go.  I have to wait.

It's like being in a dark forest.  There is a path, but sometimes it's hard to see the path, sometimes the path is like a boulevard.

...being in a sound proof box.

...being in a sailboat but there's no wind.

I climbed a mountain in Italy in 1992.  Col Rosa in the Dolomites in Italy, near Cortina D'Ampezzo.  It was a via ferrata but it was hard.  It took eight hours from start to finish and by the end I was exhausted and exhilarated.  In the middle of it, I was scared and mad and unsure and weak and I wanted to stop, I wanted to turn around.  I didn't want to do it any more. 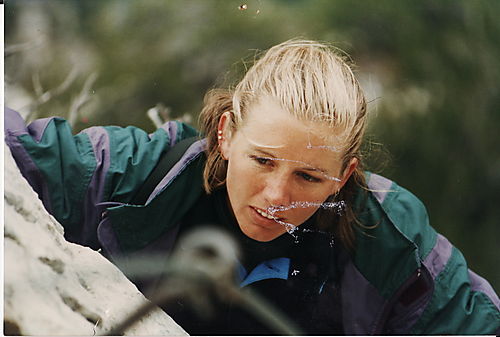 Even when you get to the top, there is still so much further to go.  (It was about five hours up, three hours down.)

Even when you think you've gotten to some milestone, some end place, some respite, there's more. Even after your are off the mountain, there is pain.  I know it's only been two months since Jen died.  Only two months.  It feels like two lifetimes and two days ago.  I know there is a long way to go and I have to keep going.  And it pisses me off.

Kur and MARE! sent pictures of their beautiful bundle of joy.  (Seriously, is anyone surprised that they created such a perfect baby?)  I'm not posting their photos, but this picture gives you a fraction of an idea of how cute Kur is as a dad. 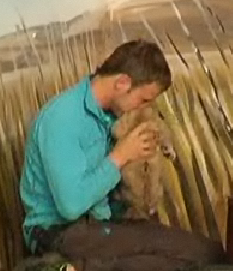 Lion Keepers Are Not Immune To Cute

You know you would be exactly the same way.
I know I would. 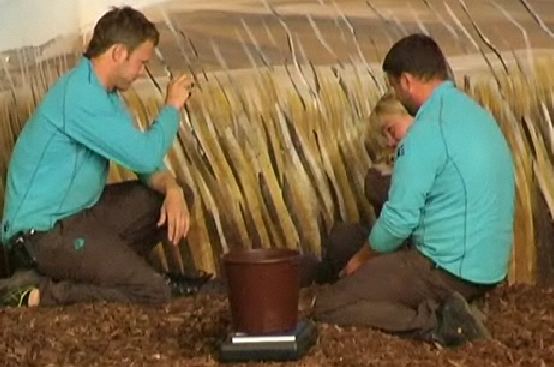 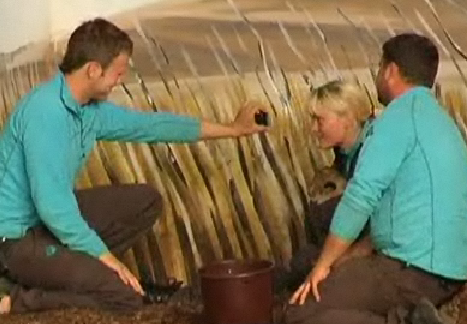 Little Z sent this to me on Facebook, but I had to post it here because nothing makes me laugh more than the opening of "Super Chicken"!

But Super Chicken especially because in those very brief/few months when Kurt and I were dating, for some reason we discussed Super Chicken and he knew the words to the song!  I knew he was for me.  (It wasn't until after we were married that I learned he had NEVER read Calvin and Hobbes...) Aloha! Welcome to my site! It's a new era here at Julia's Mexico City. After 12 years of blogging, I'm branching off in new directions. Please click through my links below the banner. I'm glad to have you here.