A few days into our trip, Kurt started doing this funny/wacky thing. He would jump in front of whatever we were looking at and I would take photos. It's kind of his homage to Where The Hell Is Matt.

I think for all future travels, this will be our "thing".
Painted Desert, Sunset 4/22 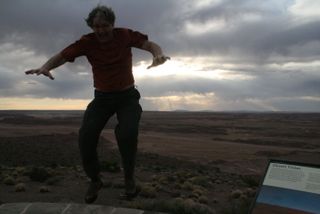 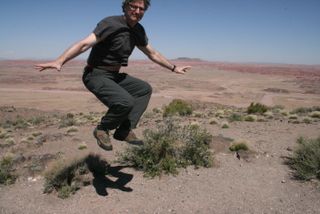 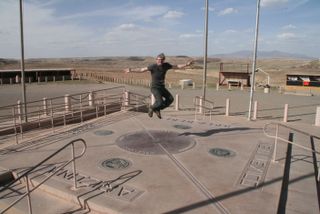 Navajo Bridge over the Colorado, 4/24 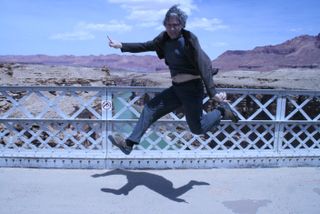 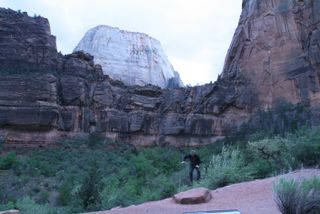 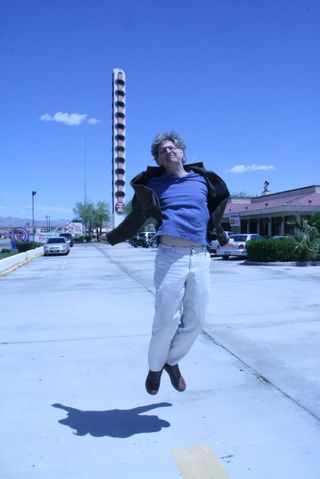 While we were on the road trip I didn't have a place to weigh in. We were half eating good stuff: apples and bananas and carrots and edamame. And half not as good: Cheeseburgers (twice) and salty snacks and ice cream twice. But overall not too horrible for a road trip. For example we never had any chicken fried steak!

So while I wasn't worried that I had put on a lot of weight and was sure I didn't lose any, I didn't want to come back home up three pounds or anything. I weighed myself on Sunday and lo and behold I was still at 193. Good good good.
We got home Saturday and on Sunday I watched CBS Sunday morning and they had a story about Engine 2 fire company in Austin who eat only vegetarian and who have reduced their cholesterol significantly and improved heart and over all health, not to mention lost weight. Their website is here. I was intrigued as I've been looking for good veggie based recipes and figured if firefighters were loving the food it had to be pretty decent. (I had tried a few recipes from a vegetarian cookbook I already own and found both a bit unsatisfying.) Also, that the "Diet" is not about 1/2 a cup of this and 3 Tbs of that. It's about what you are and are not eating.

I bought the book and have already made three recipes that both Kurt and I really enjoyed. The first one: whole grain pasta with pesto, took a moment to get used to as the pesto was made with no oil and no cheese and whole grain pasta is different than regular ole white pasta. Anyway, it was fine. Monday night I made red beans over quinoa with kale. The red beans recipe was pretty tasty and we gobbled it up. We both love kale anyway. Last night I made what turned out to be a MAMMOTH lasagna. And dang it was soooooo good. Monday and yesterday I had the previous night's lefotvers for lunch, though yesterday I was so busy I had only time for about a cup of edamame and five bites of the red beans and quinoa. For breakfast I have old fashioned oatmeal or Red Mill hot cereal with either some honey or bananas.
So with a very veggie meal plan starting on Sunday night (I had eaten about 10 crackers and some move popcorn during the day on Sunday) I am amazed at the results:
Weigh in on Wednesday 4/29: 190.
Woo hoo! Down three pounds in three days!
This is not a crash diet, and I don't feel deprived or forced to eat tiny portions. Monday night's red beans dinner felt like a HUGE plate -- though half was filled with kale. Last night's lasagna portion was not huge, but not puny either. And all of it without oil, meat or cheese/dairy feels so good after you eat it, even if you pig out. It's going very well so far.
The Engine 2 plan is 28 days and focus more on the result of bringing down your cholesterol. That will be fine with me. I didn't test my cholesterol before hand, but next time I go to the doctor I'll ask for one just to see where I am after this.
Feeling very good!

Last full day of fun on the road -- up early in Monument Valley: 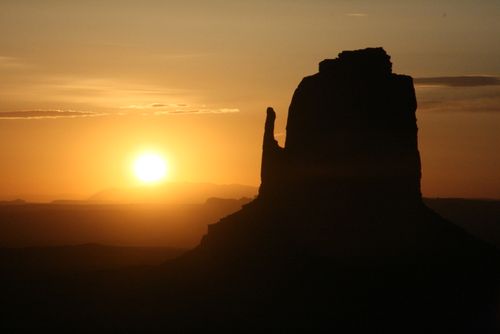 Then an unexpected end of the day in Zion.
Kurt works his magic on the camera self timer... 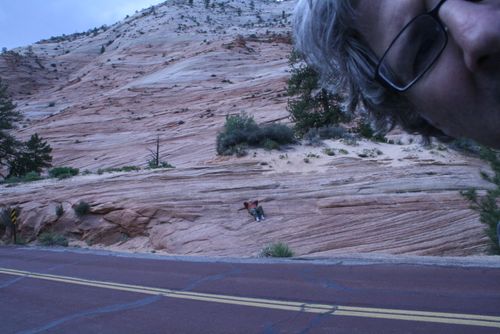 We laugh and laugh.
Spending tonight in St. George Utah -- had sushi for dinner, what a refreshing treat! Home tomorrow afternoon we both decided that what we really missed most? Humidity.

When you start at the Petrified Forest and Painted Desert then end up at Monument Valley, it's tough to choose just two. There will be many other blog posts with photos to come.

First up: Kurt gets busted: 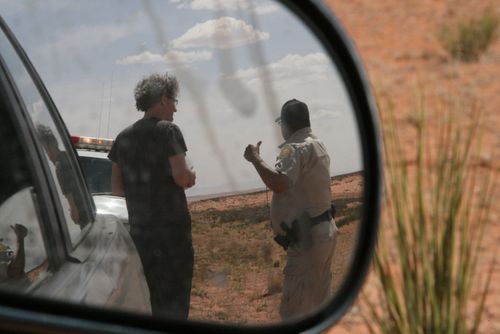 He was going 7 miles over the speed limit (72 in a 65). The nice police officer actually let him off with a warning. Two warnings, actually -- slow down and don't leave your car unattended in Shiprock. Thanks sir!
Then we took another 400 pictures as we approached Monument Valley. Once the sun started going down and the colors got crazy, we really lost our shiznit. 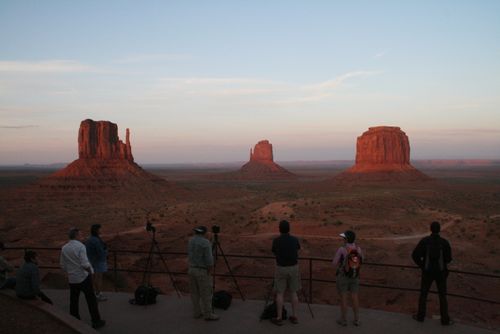 Driving into the valley today (I'm writing this Friday morning).

I know Route 66 only exists in old broken down motels, museums, and in books. The official route is no more, just historic signs and markers. Some places are fixed up and still in working order, like the WigWam Motel here in Holbrook. They were fully booked last night when we arrived and the nice woman who worked there said they are usually booked all the time. Cool. Here's a quick snap as the sun was setting yesterday:

There are plenty of places along the way, gas stations, cafes, etc that are boarded up and falling to ruin, but you can see that on most highways across the country. It's the special signage going to a slow death that make me sad. For instance, Twin Arrows, east of Flagstaff on the I-40: 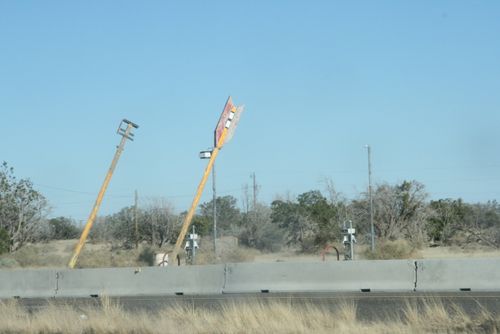 I can't even find a vintage postcard online for what it used to look like. But those are supposed to be two bright red and yellow arrows. The cafe and gas station are sadly boarded up and fading.
But there are other places that are alive and well in their retro splendor. Later, I'll post more about those places and a collection of great signage we've seen along the way.

Nothing inspires me more to lose weight than seeing photos of myself day after day on this road trip. It's been ages since I've had so many full body pictures taken of me and I'm even more surprised at how much weight I need to lose. Somehow it's more surprising to see photos than to see yourself in a mirror every day. How is that?!

So as part of my "let's be honest and put it all out there!" here are three pictures so far that make me really look forward to the weight coming off. Yowza. Thanks everyone for not saying what you might have been thinking. I've been thinking it for you all along, believe me, but somehow fooled myself for ages. 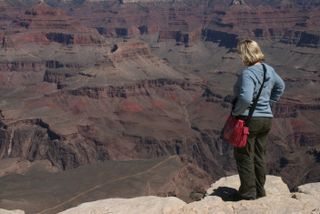 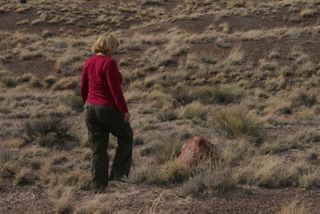 Love Me Some Wood, Petrified Wood, That Is...

Seriously, I am totally digging the petrified wood at the Petrified Forest in Arizona! They are 200 million years old and just lying around everywhere. They look like trees, but not quite. Amazing colors and textures abound. 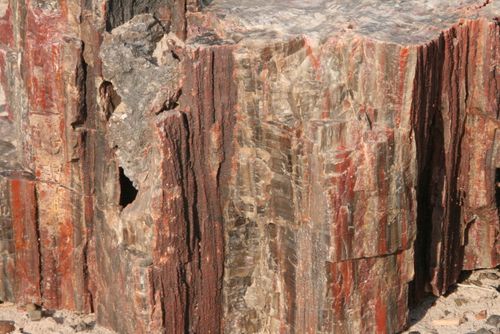 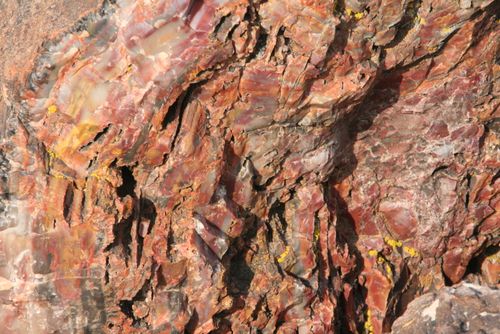 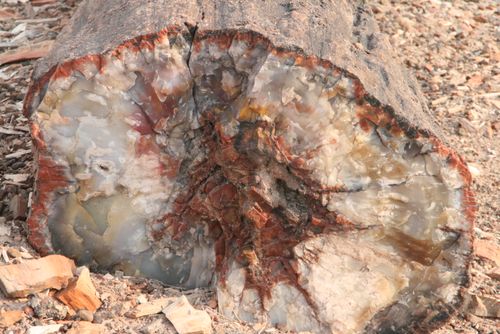 When a full tree is lying on its side broken in pieces, they look like dinosaur bones.

These things are so cool... 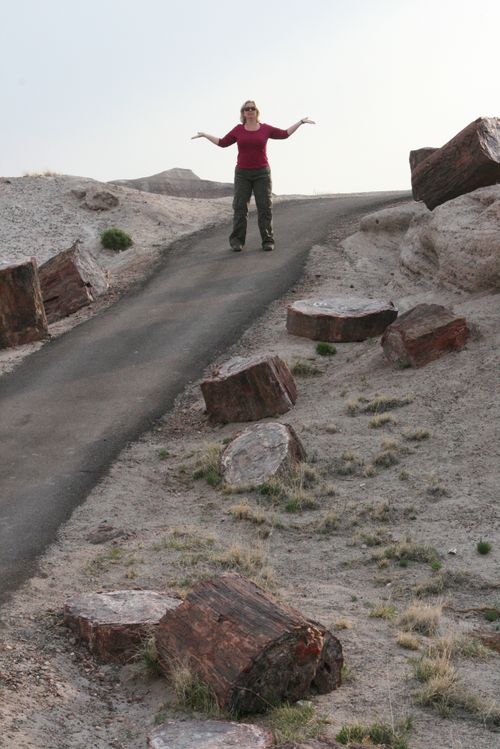 Here's Kurt as we are walking around Crystal Forest: 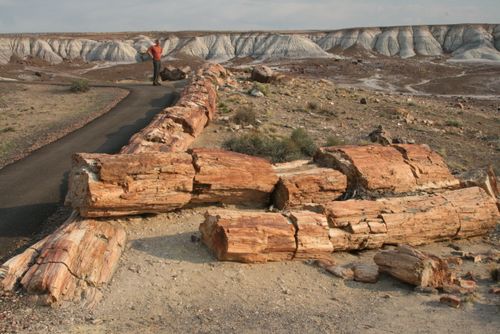 Look at those things! They are 200 MILLION YEARS OLD!!
At the end of the walk, we saw this: 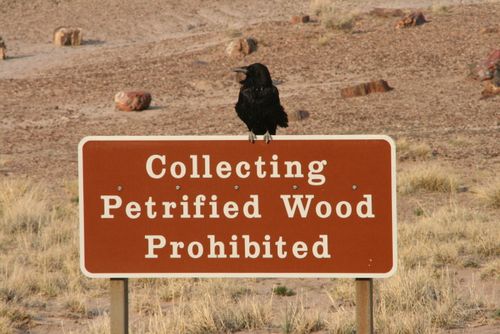 The Ravens will mess you up if you break the rules. Seriously.
Tonight we are staying in a Best Western in downtown Holbrook. We had no idea that the WigWam Motel was here. They were all booked up so no sleeping in wigwams for us tonight. Oh well.

Sunday we left home at 6:45 am, heading east into the rising sun. We flew through LA in no time and were heading north on the 15 toward Barstow. Breafast at Bun Boy was a script fodder experience for sure. Took the 40 toward Needles and Kingman, breaking off to see parts of old route 66 where we could. Then we got to the Grand Canyon, checked into our hotel in Tusayan and entered the park. Amazing. We considered a helicopter tour, but decided the $450 would be better spent elsewhere. Early dinner then hit the sack.
Monday - breakfast at the El Tovar with a view of the canyon. Then we meandered our way east out of the park, stopping to get various views of the canyon, mind blown every time. So glad we went "off-season" as I can't imagine it 100 degrees with a million tourists. We drove out of the park and stopped at the Navajo viewpoint for the LIttle Colorado river section of canyon. Great view straight down. We headed south toward Flagstaff, detouring to see Sunset Crater, which was lovely and had crazy views toward the Painted Desert. Then we went to Meteor Crater but the sign said closed at 5pm and it was 5:10. Back to Flagstaff for a cruise down old Route 66 and into historic old downtown near the train station to spend the night in a funky old hotel.
Tuesday - Meteor Crater! Saw the big hole in the ground, then headed back toward Flagstaff to head down to Sedona. Gorgeous drive through Oak Creek Canyon, we stopped at Slide Rock park and watched people swim and slide down the creek. Looked like a great place to spend the day. We were enjoying the views of the increasingly red rocks and amazing formations. Then we hit Sedona and suddenly felt like we just had to keep driving. SO MANY tourists, just too overwhelming after quiet drives with gorgeous views. We went further south to see Montezuma's Well (something Kurt had seen before). Then we needed a place to bivouac for the night and headed to Jerome and got a balcony room at the Grand Hotel. Dinner was spectacular at the Asylum Restaurant.
Wednesday is today and we are going to wander around Jerome a bit, have breakfast and then move along to points east and north.

Today started with Meteor Crater and ended with Jerome. In between was Sedona which we ran from very very quickly. 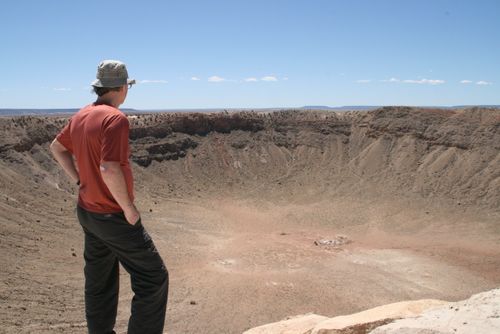 The Chicken that ate Sedona. 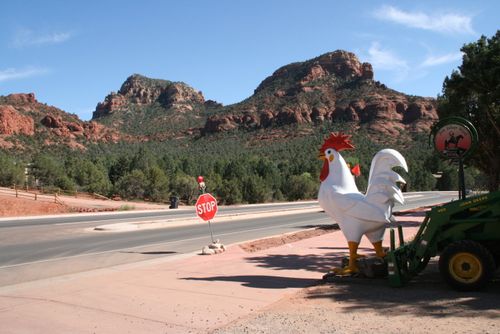