There are so many big changes on the horizon that I spend a lot of time pretending I don't see them coming. These are changes that scare the bejesus out of me. And these are changes that I want, that I'm actively seeking, that I desire. They all involve things I've never done before so they seem so foreign and almost impossible. I say almost because I am still an optimist and I still want them to happen.

I know I haven't talked much about what my/our plans are for 2010. I've mentioned vague notions about creativity and new roads. I'm not discussing much openly about that because as Benjamin Franklin said "Well done is better than well said." Or if you prefer Shakespeare, "Talkers are no good doers." I would rather tell you about it all after it's done. So stay tuned.

On other fronts, there are kids in our future. No, I'm not pregnant. We got delayed a bit on this over the last two years with other family things to deal with, my sister getting sick then dying. Kurt's mom needing to be in a nursing home for a while then moving her to LA. Big stuff that took up/takes up a lot of space. Now we are looking ahead to all those amazing joyous things that so many of our friends are experiencing.

Part of this "make the family bigger" plan involves making the house bigger. Or at least making the garage bigger to accommodate new office and guest space so that il bambino has a spot inside the house. (I guess it's frowned upon to have a baby's room in a separate building?) This will take time and money and energy and effort. It will mean steady income and cramming ourselves back into this space while that goes on.

As a good friend said recently about a new phase in her young son's life "It's a transition." Good thing to remind myself of as we keep moving forward. Life never sits still, things are always in transition, some are just smaller and less obvious than others.

While all this goes on, I am feeling unglued. But that doesn't stop me. It can slow me down sometimes, but it won't stop me.

Here at the end of week three of the new year and week three of my six week plan, I find myself sliding a bit, not moving forward. No one is perfect so I'm not beating myself up, just acknowledging where I am.

Today I've been hit with great positive reminders about commitment and moving forward and moving through fear. It started with Seth Godin's email today about needing everything to be okay:

"No, everything is not going to be okay. It never is. It isn't okay now. Change, by definition, changes things. It makes some things better and some things worse. But everything is never okay. Finding the bravery to shun faux reassurance is a critical step in producing important change. Once you free yourself from the need for perfect acceptance, it's a lot easier to launch work that matters."

Then on Twitter Sean Bonner retweeted Rev Run who posted:

Thank you Sean and thank you Rev Run!

And not long after that tweet, Jenny Yerrick Martin tweeted about a new guru, a new inspiration for us all, a young man who committed himself to losing weight and lost over 125 pounds in a year. Here is Jenny's post which is about commitment and goals and determination. All extremely inspiring things to read and be reminded about.

My six week plan has been slightly vague in some areas, more specific in others. It is:

So far I have exercised six days a week, creating sore muscles -- a good thing! I have eaten somewhat less and somewhat better and have lost about four pounds since the holiday high. Also good, but not enough. I'm about halfway through my book proposal, and I'm getting a bit slow each time I open the document. I need a recharge on that. Lastly, I have started the group of writers and that is very exciting.

A friend on twitter (JacMac30) said, "Can't say you strike me as someone that wavers from a task." I appreciate that this is how I look to others. Some commitments are easy: my marriage for one. Yes, marriage takes work and effort, but since I just adore and love Kurt so much, that effort and work and commitment is so much easier. My paying job is not a difficult commitment, though it does have its challenges as every job does. And there are personal challenges about that job I'm working on. But I'm so grateful for the income and the people I get to meet that the commitment often feels effortless.

So I'm recommitting to my goals and when the fear filled voices - either the ones in my head or the ones from non-believers - start speaking, I will remind myself of what my commitments are and move forward.

Now I'm off to fire up the Wii Fit and sweat for an hour.

Grateful for the job and income, truly. And in week three of my six week plan things are moving forward -- this is good. I'm actually enjoying using the Wii Fit and find that an hour has gone by quickly and I have sore muscles the next day. All good things.

The one thing I have a shortage of is time. Time to blog here.

So please enjoy this post-birthday LOLcat while you wait for the return of my scintillating blog posts. 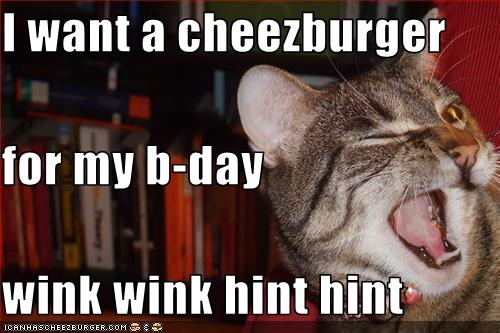 Happy Birthday To Me!

Okay, it was yesterday, January 13, but I was way too busy with work to be able to blog about it.

Here's how I looked 43 years ago to the day: 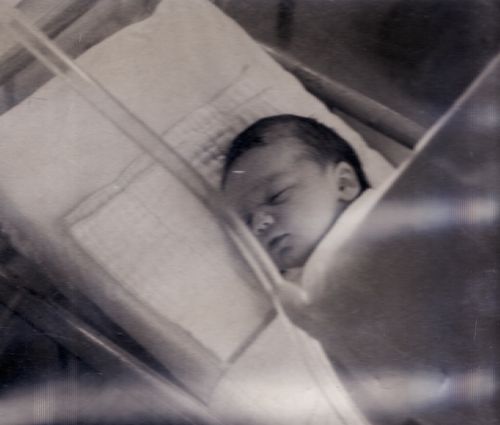 And I know what some of you are thinking: "I KNEW you weren't a natural blonde!" Well, as my mother and photographic records indicate, all that dark hair fell out and a few short months later, I looked like this: 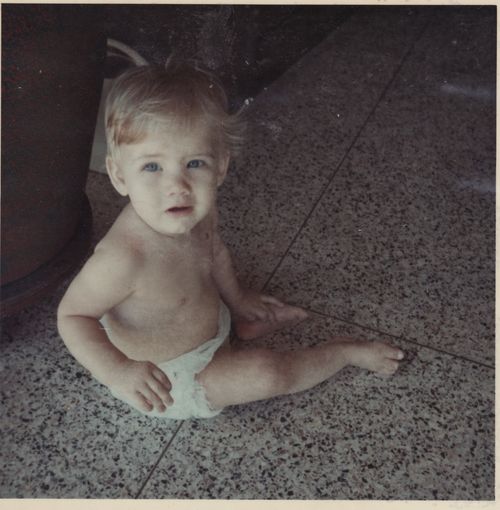 Ah, those were the days. There is so much of my dad in that face. And the Rivas Big Toe. (I wrote that to make Dor laugh, but it is true.)

Yesterday was a wonderful day of birthday wishes via phone and email and twitter and facebook. Social networking sure makes you feel loved! And I feel oh so loved.

Kurt and I went to lunch and shared dessert. The waitress brought it with a lit candle and said make a wish. I thought for a moment and in that moment Kurt said, "Hard to make a wish when you have so much." And I almost burst into tears because it was so true. I am so grateful for all I have, esepcially the people in my life. But I did make a wish. I'll let you know if/when it comes true.

I miss Jen a lot today. No phone calls or emails from her. But here we are together in 67: 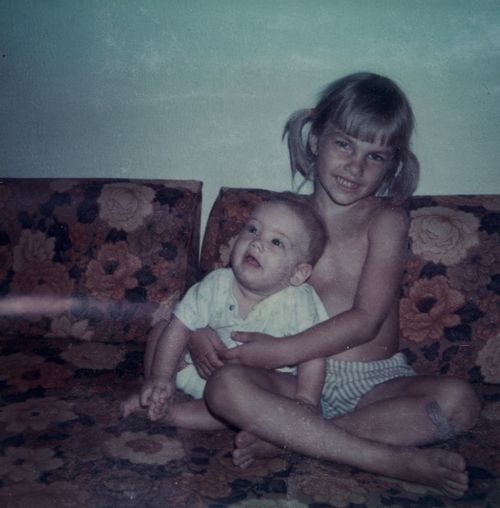 Without them – Seth Godin

One of the most common things I hear is, "I'd like to do something remarkable like that, but my xyz won't let me." Where xyz = my boss, my publisher, my partner, my licensor, my franchisor, etc.

Well, you can fail by going along with that and not doing it, or you can do it, cause a ruckus and work things out later.

In my experience, once it's clear you're willing (not just willing, but itching, moving, and yes, implementing) without them, things start to happen. People are rarely willing to step up and stop you, and often just waiting to follow someone crazy enough to actually do something.

Thank you Mr. Godin for reminding me of what I have to do.

Posted at 07:16 AM in Blogs, Dreams/Goals/Plans, Inspiration, writing | Permalink | Comments (0)

Remember that scene in Stripes where John Candy explains why he joined the army? No? Well, let me jog your memory:


This is how I'm feeling here in the early days of 2010. I've been swallowing a lot of aggression along with a lot of food (some of it pizza) in the last month and I have to figure out a better way to deal with it. So, instead of joining the army, I will be focusing on better ways of expressing my FEELINGS! Like, oh I don't know, writing, exercising? Yes and yes.

I will be a lean mean fighting/writing/creating machine in 2010!