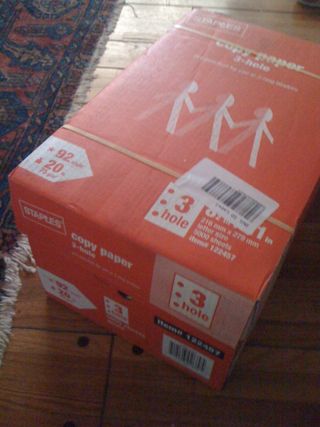 One of my biggest goals for the year was to write with purpose. It's one thing to write a script, futz around with it, start, stop, put it in a drawer, take it out of the drawer, put it back, then move on. I have two scripts like that. It's another thing to write a script with the specific purpose of getting it out there to someone who might actually want to do something with it. And by "do something with it" I mean option it or buy it or develop it or even just refer me to someone who might want to do any of those things.

2010 is about getting my work OUT THERE. It can't just live in my office.

First though -- getting the script written. Well lo and behold, I have my much much much improved 2nd draft of it done this week and am quite proud of myself. Now I will begin the process of getting it out there.

There is another writing project that I've been working on in a group and that is coming to a turning point that fits into some of my goals. I'll keep it vague for now. Stay tuned.

As for the volunteerism, I have done a small bit more, but this summer was not so good in that department. I answered phones at KCRW again in August for three mornings, so that was a good six hours all together. It's been over a year since I got my last tattoo so I can now donate platelets again. Tomorrow I'll be going in at 10 and hopefully my iron levels are solid so I can actually donate! This may be my go-to volunteer ism for the rest of the year. It's close by and almost effortless. I'm also helping out Kim Tracy Prince with her work with Help A Mother Out and now that I'm done with my script, I can focus back on that again. More on that in a later blog post.

Weight loss and fitness? Coming along well, though slowly and steadily.

Adoption? Yes. Just waiting. (Also more on that in a separate post.)

Life is good, goals are being accomplished. I am very pleased and proud of my progress this year!

We are very excited about this. Here is a visual of our sweet sad little house. So much peeling paint. So much sanding and patching that needs to be done.(Click to make the picture bigger and discover the true horror of the window frames.) And today it gets started. The guys will be sanding, scraping, patching and replacing the wood trim for days, I think. Then the paint will get rolled on.

This is the least expensive major thing we're able to do right now and it will be so refreshing. Just the thing to welcome a new baby -- whenever that happens! 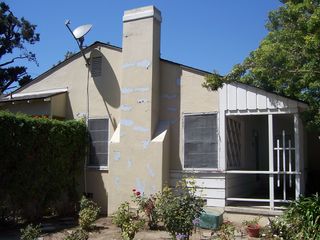 I'll definitely do before and afters when we get there, so you'll be just as pleasantly surprised as we will be when it's done! Stay tuned...

And by the way, if you need a GREAT and extremely inexpensive house painting crew in LA, comment or email me as these guys are fantastic. They did two of our neighbors houses and came highly recommended. They go above and beyond the call. They've already replaced the wood around one of the windows and I'm sure there is plenty more to come there!

Holy cow it's been two weeks since I've blogged at all! The weigh in number is not great, back up to 176 in these last two weeks. (Last time was 175.) The silver lining is: at least I know I can maintain my weight once I finish losing it!

I have had my focus elsewhere and have also done a bit of comfort eating as frustrations came and went regarding various facets of my life in 2010. We also had friends in from Macedonia for a week and then Classic Eats was in there too. At least I didn't gain more than a pound, so I am glad for that.

The exercise is continuing well. I bought those "five finger" shoes and am loving them for my walk/runs. I plan on turning those into run/walks in the near future. The cool thing is, overall, I can see better muscle tone where there was very little. This makes me happy and keeps me motivated.

I bought a bikini! Though I am exchanging the top for a bigger size as my rack is still not small, but hey, I've been used to that since I was 12. When I tried on the bikini, I started to criticize myself (old habits die hard) then thought -- F**K that! Why not just feel good and wear a bikini and enjoy myself? No body is perfect and why waste time worrying about it. There is a quote from an Anne LaMott book (can't remember which one!) when she is trying on dresses for a first date and she's with her friend who has terminal cancer. Anne tries on the dress and says something like "My ass is too big" and her friend says, "Oh Anne, there's no time for that."

Amen sister! We have to learn to live and love the bodies we are in at any stage. Life is too short NOT to wear a bikini if we want to!