Zoolander was the first movie we went to after 9/11 happened. It seemed the no-brainer choice -- total escapism. I was having a good time, laughing an enjoying the ridiculousness of it all.

Then came the moment where the two models have their "Walk-Off" and they need a judge. I knew, I KNEW it was going to be an amazing cameo by someone huge and I was so excited SO EXCITED to see who it was going to be. Then this:

And I felt like nothing bad could ever happen again. David Bowie was there.

It was not dissimilar from the scene in Extras where Ricky Gervais' character is in the VIP section and tries to connect with the genius who is David Bowie. I'm sure I did a spit take when Bowie just launches into singing with "Poor little fat man..." Then a bigger spit take as he swivels round to the piano and just launches in to the full song.

I don't know Bowie's music very deeply. I don't relate to Ziggy or The Thin White Duke. I was about Putting Out Fire With Gasoline and China Girl from Let's Dance. I could probably sing all the songs by heart if you played it for me right now as it came out when I was in high school. I have fond memories of listening to it at Lisa's house in Makawao. I do know all his greatest hits, though, and have been surprised this week to realize just how many there are.

Of course I knew who he was and that there was a big important history to him in the music world. And yet, I truly fell in love with David Bowie in the movies.

Now you are going to scoff at me because having said that, I will confess I've never seen The Man Who Fell To Earth.

I think I first heard about David Bowie in any serious way from my friend Jai. When I knew her she was just Karen. But she came to Seabury from Honolulu with a stack of records that blew my little Maui mind. She might have had Bowie, I don't remember (Adam and The Ants stood out to me more). But she talked about Bowie and about The Man Who Fell To Earth. This was back in the day when you couldn't just pop over to the video store and grab it, much less download it. But the way she talked about him and the movie and how much she admired him really stuck with me. It's almost like I don't want to see the movie because it might not live up to what I heard about it from Jai.

There were two movie theaters in close proximity to me on Maui and I lived in them. In 1985 a movie came out called Into The Night with one of my favorite actors, Jeff Goldblum. It looked funny and I went to see it. (Probably alone as I loved going to see movies alone!) In the middle of this wacky awesome movie comes this scene: 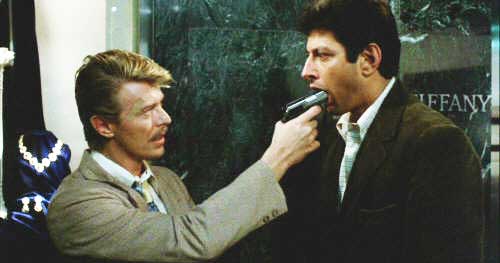 Bowie playing a hit man, out to get Jeff's character. Bowie is suave and smiling and charming and amazing. He's in the movie for about 5 minutes but it made me happy and surprised. I also thought, "How cool that this amazing musician (so I'd heard) was just having a laugh doing a little part in this movie!" (I own this movie and can watch it over and over. I also love it because it is such a loveletter/postcard/snapshot to LA in the 80's for me as I was just about to move there.)

Also in 1985 was The Breakfast Club. That seminal John Hughes movie that defined a generation (I can use that phrase, can't I since I'm that generation?). And what was the opening visual of that movie? 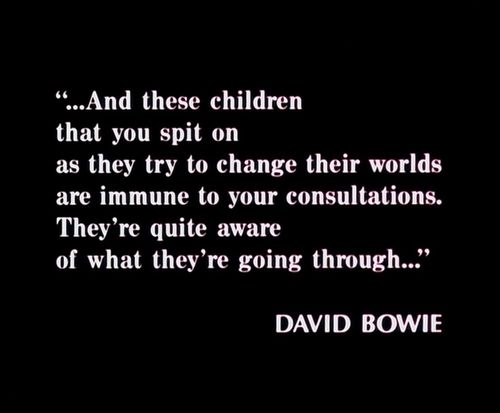 I'm not sure which movie I saw first that year (They both came out in February of 1985), but David Bowie just seemed to always be there, always kept showing up. (Let's Dance came out in 1983.) And again, I didn't know much about him, but clearly he was important.

Important is not quite right. Significant. Exceptional. Vital.

One of his last big roles was playing Nikola Tesla in The Prestige. 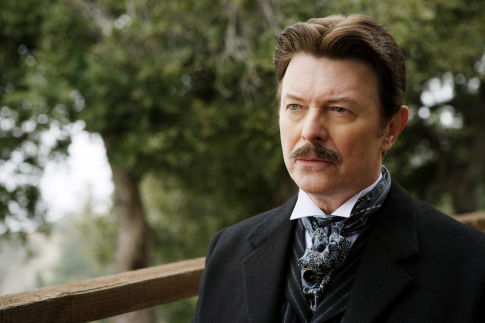 If you know anything about Tesla (and you should because he's astounding - read this from The Oatmeal) you know that he's otherworldly in his genius. I believe he was also kind and open minded and misunderstood. Who better to play this wonderful soul, but another wonderful soul?

And while everyone is posting images of Bowie from the Glam Rock period  -- you know the one with him and the big painted bolt on his face -- I will always remember him like this - impeccably dressed, handsome, gorgeous, enigmatic. Those eyes. 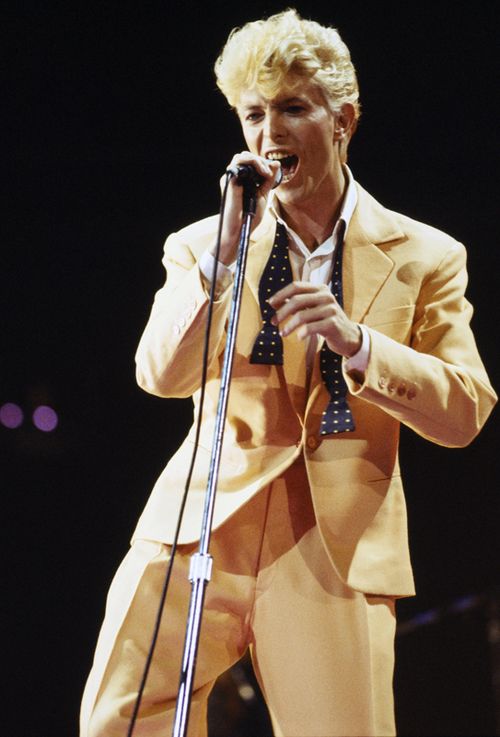 As my friend Laura said upon hearing the news: "Bowie seemed timeless, so his passing just feels incongruous with reality."

That is the truth to me. How could this ethereal, otherworldly, but oh so human being actually die of something so crass, so low as cancer?

Bowie just keeps showing up on social media this week and I'm glad. I don't want him to ever go away. I want to be surprised by his cameos forever.

Maybe he'll make a cameo in my dreams.

Harper used to call "Mama!" when she woke up and I would come to her room and say good morning and give hugs. Now she's a big girl and she gets up on her own. I'm usually already up, writing, so I can hear her coming. Depending on her mood she'll either come over to me for hugs or go to the couch and sit and I'll come over to say good morning.

Yesterday she got up and saw me and all she said was, "Do you want to look at the beautiful sky?" and she went to the couch to open the curtains so we could look toward the sunrise. Of course I said yes and this was our reward: 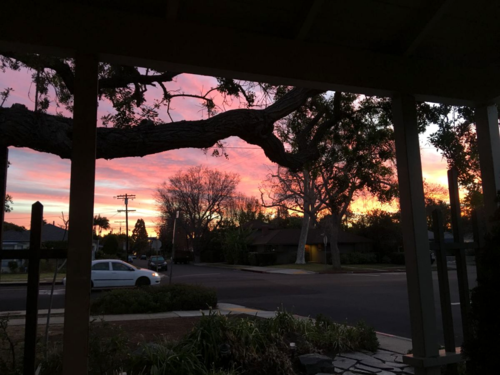 For almost ever since Harper was born, I've taken her outside at sunset to look at the "beautiful sky" and always make a point to look at the pretty colors and clouds in the sky. Now Harper will point it out to me and it makes me so happy for her to make me come and look.

Harper Runs With The Wolves

Okay, not really wolves. But all dogs are descended from wolves, so it's almost the same.

Grace and her dog Monkey came over for lunch and we took Monkey to the nearby dog park. Harper had more fun there than Monkey did!

So nice to have Grace so close! 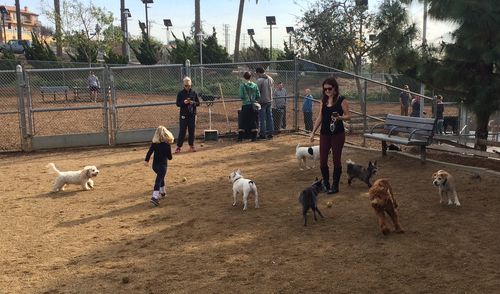 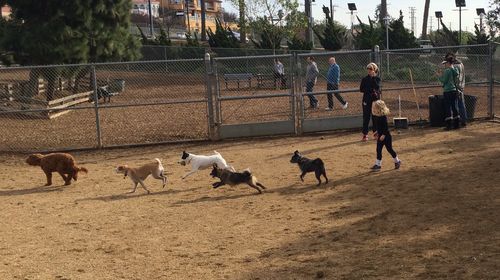 The Holidays were low key around here. After being home on Maui, it was nice to just relax at home for the holidays. Though there was a bit of wrapping/shipping frenzy before the actual holiday! I didn't take many photos, I think I just enjoyed being in the moment. Imagine that! 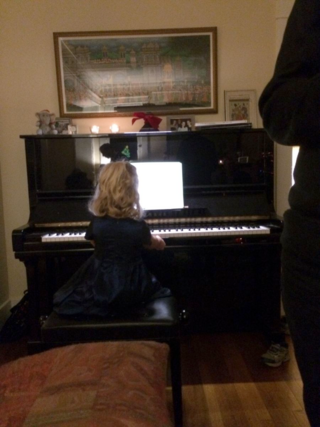 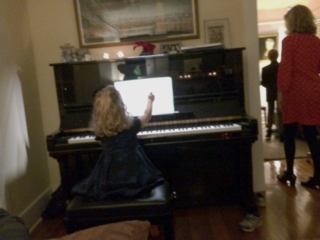 We were invited to my second cousin's house for a Christmas Eve party, which is something they've been doing in their family since her parents got married in 1958! Amazing that she's kept up the tradition. Makes me feel squishy about not having a tradition like that. Time to start making some! Harper enjoyed the party, so many kids to play with, and seemed to enjoy the piano a whole lot. She sat and played "Jazz improv" (as someone we were talking to said) for a while. The sheet music was a Christmas carol and there was a pencil on the little shelf. Harper would play then pick up the pencil and write on the music (something the other kids had been doing). She looked like a tiny composer working on a piece.

For our actual Christmas day, Harper got a stocking full of Pez, just as she had asked Santa for. She (and we) also got many wonderful gifts and were very grateful to all the Santas in our lives! 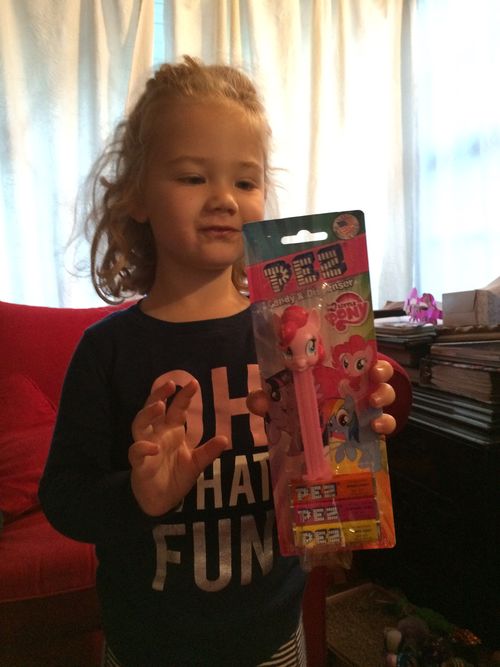 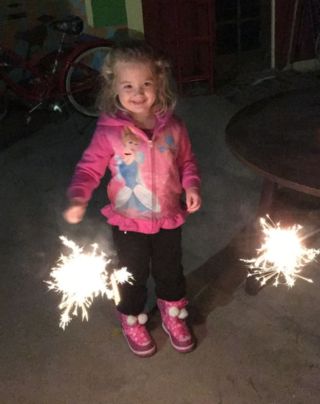 Every new year is full of promise and hope. I have many goals and plans, much of which continue through from last year, with a few new ones thrown in. I won't give you a list, I'll just summarize by saying there will be various short films that will be produced and distributed, scripts to finish and produce, a novel I'm planning on writing as well as financial and investing goals that will start this month.

Now that Harper is not so much a toddler, but a big girl, there will be travel to places other than Maui. Really excited about that!

And as ever, better health and fitness. I started a great fitness program last year and while various things took me away from it in December, I'm back on track today.

I have a lot on my plate and will stay focused. I pride myself in walking my talk and the year will reflect that.

All the best to you and yours!