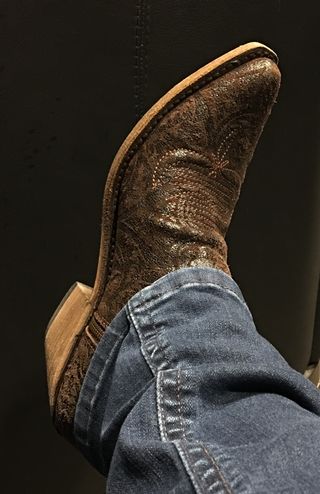 The other day I wore these half boots that Kurt bought for me. My colleague and I were walking down some stairs and I was off balance and mentioned I was not used to wearing these boots. He looked at my feet and said, "Oh yeah, ropers heels."

Dang! Someone who knows about cowboys and rodeo! If you saw him you'd think: "LA hipster" but in that instant I remembered that he grew up in Calgary, home of one of the biggest rodeos in the world. I'm guessing he wasn't really involved with rodeo as a kid, but you can't live in a city like Calgary and not know about rodeo. That would be like living in LA and not knowing about Hollywood.

Of course there are plenty of times when I talk about rodeos and people would say "Wait, you grew up in Hawaii, how do you know about rodeo?!" Clearly all they imagine are beaches and hula girls. Well, that and Diamond Head. Hawaii is a big cattle state, having one of the biggest cattle ranches in the country. It's on the island called "The Big Island." Big being the operative word.

My dad had a career as a sportscaster in Hawaii. When they moved to the Big Island, he started to work with the cattle ranchers and became the announcer at all the rodeos they had in Waikoloa. (He also had a big hand in bringing polo back to the Big Island, but that's a different story.) As a kid I spent summers in Waikoloa and when there were rodeos at Waikoloa Stables Arena, I ran around with all the other kids, punching cattle through chutes, hoping to get ahold of one of the coveted cattle prods. How old were we? 8? 9? 10? We used cattle prods with no supervision (I don't remember any) but no one got hurt (other than the cattle).

There Is No "Some Day"

At my job I have the pleasure of working with a talented and relaxed VFX Supervisor. (Two things you MUST have in a VFX partner to retain your sanity.) He and I have had a few big picture what do you want to do in life outside of this job type conversations. In the course of a conversation we had with a third party yesterday, I discovered that my colleague is a fantastic painter. His work really impressed me. In the same conversation he lamented that he didn't have the time he wished he had to paint more.

Later, we were in my office going over work stuff and I mentioned how impressed I was with his paintings. He humbly said thanks and then got wistful and said, "Some day, Julia, someday we'll be able to do what we really want." I looked at him square in the eyes and said, "No, sir, not 'Some day' - October of this year. October I'll be [doing the thing I want to do]!!"

Hearing that sad "Some day" only redoubled my passion to get one of my personal projects done this year. Hell or highwater, I will be doing it.

You have to know, all of you, there is no "some day." You have to pick a date and make it happen. Some day you'll be dead. But other than that, there are specific days on a calendar and you have to pick one and go make stuff.