We Live In A Modern City (Almost)

Living in LA requires a car. Two problems with that:

1) Not everyone who lives here can afford a car and they rely on mass transit, which, in modern times, had been almost entirely made up of buses until 1990. That's when the Blue Line train opened, followed over the next 26 years by the Red, Green, Gold, Purple and now the Expo Line. But still, mostly buses.

2) Because there are so many cars and the majority of mass transit is buses, the roads are crowded.

LA had a history of great rail transit with it's Red and Yellow car system, but due to high costs, they were phased out for buses, the last rail lines dismantled by 1963. So to build subway and surface rail lines in a city that for decades relied on vehicles on surface streets is no easy feat, I'll grant you. And LA is big. Let's look at a map (click on it for a bigger image). 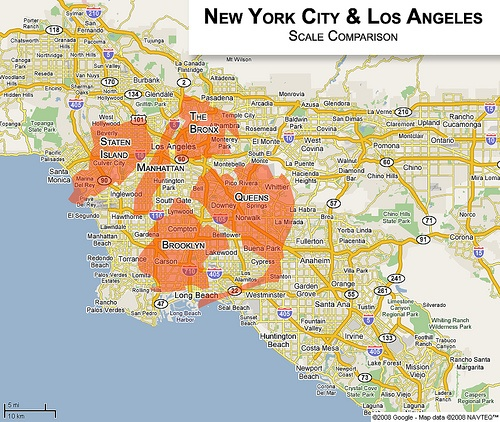 The five boroughs of NYC are large. The greater LA area is also very large. This map incorporates other cities that live within LA (Long Beach, Santa Monica, Culver City, etc) and starts to touch on Orange County ("WHICH IS NOT LA OMG!"). Just to reiterate that restarting rail lines is not easy after all those years. And not just geographically. The amount of people who are against mass transit is astonishing.

I went to a few of the planning meetings for the EXPO line (as it is two blocks away from our house). I met many neighbors who were vehemently opposed to having it near us. "Crime will go up!" There is plenty of crime in our part of town already, trains or no trains, sorry to say. "We don't want those people come to our neighborhood!" Who are *those* people? People who want to use mass transit, like me?? "Our property values will go down!" In fact, property values generally increase. "The noise of above ground trains will be unbearable!" This part I can't judge because we live two blocks away from the train, not across the street from it. However, we do live three houses away from the 10 freeway and that sucker is LOUD. I doubt people can hear the train over the sound of the rushing freeway!

I couldn't wait for the train to get here and all this preamble to say: THE TRAIN FINALLY OPENED ON MAY 20!!

They had free rides on Friday the 20th and all day Saturday the 21st. We hopped on after work on Friday and went to Santa Monica to have dinner. What a blast! 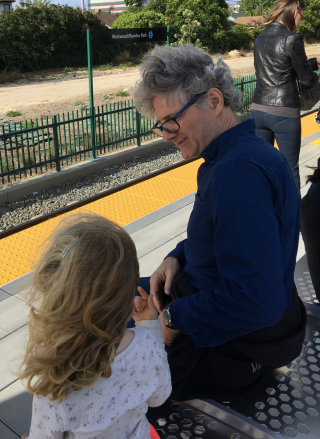 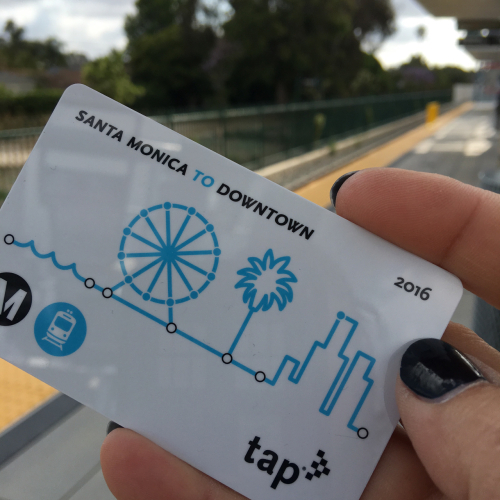 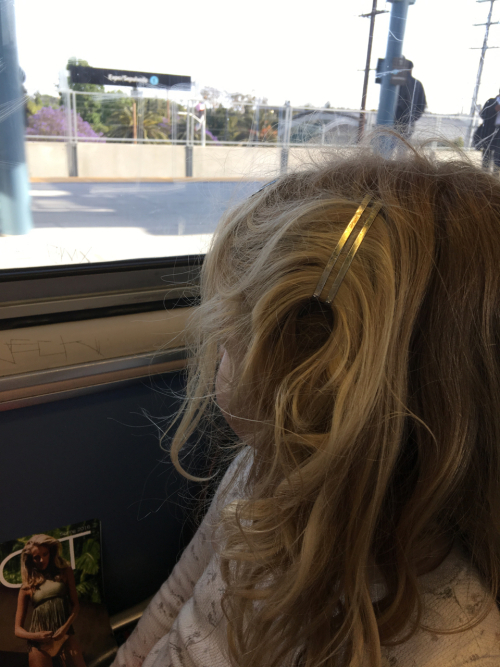 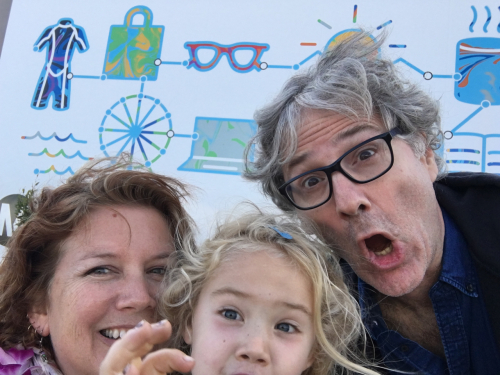 On Saturday the trains were PACKED. But we went again, meeting friends in Culver City and taking the train down to Santa Monica for lunch. While we had to stand the whole way, both ways, it was still a pleasure.

I'm currently working in Culver City and made it my goal to take the train at least once a week. It actually takes less time to drive, but I love have a little walk, a little ride, then another little walk. And after being on so many other city transit systems in my travels, it's almost surreal to use a train to get around in my neighborhood in LOS ANGELES! It's almost like living in a modern city.

Eulogy For An Old Cat 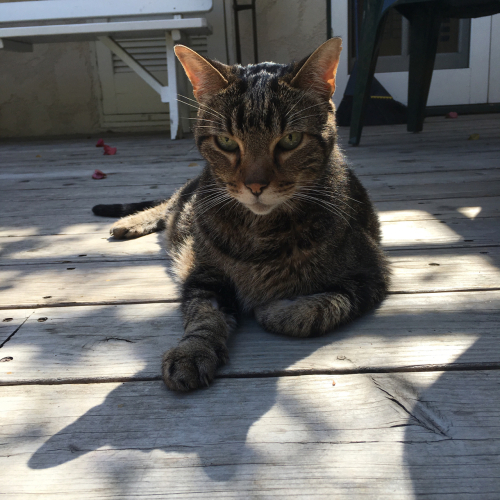 Dynamo belonged to Kurt's mom, Dot. He was born in Texas in 2001 and we met him when he was a teenage kitty, all legs and a ball of energy, hence his name. He grew into a large handsome tomcat and eventually grew out of his name as he mellowed. Every visit to Texas was made more enjoyable by this big lug of a cat who would come in and plop down on his back so you could rub his belly.

When Dot moved to Los Angeles, Dynamo was in the car with she and Kurt, a big road trip to mark the new beginning. Dynamo rode out the long miles on the floor of the Buick, not happy, but never complaining.

Dynamo adjusted to being an indoor cat, chill dude that he was, after years of roaming the neighborhoods in Texas. He grew fat and lazy, but always loving and sweet. He was such a comfort to Dot and was with her when she died.

He moved in with us a few days after Dot's death and adjusted well. We called him Big Mo. Willoughby was not happy, hissing and batting at him all the time. Dynamo let Willoughby do her thing, even though he outweighed her by a good eight pounds and could have really put her in her place. The best part was, he could go outside again and he loved it. With all the backyard roaming and different cat food, he soon lost his bowling ball like looks and became the sleek cat he had been, strong and regal.

My favorite thing about The Big Mo was his cold wet nose that he would smoosh into yours at night, followed immediately by a big head-butt. He pile-drived his love to you. He was an under-the-covers sleeper, like Bunny was, mostly attaching himself to Kurt's side, usually having walked over my head/pillow to get there.

Willoughby eventually mellowed out around him, though they still never were pals. More like indifferent roommates. 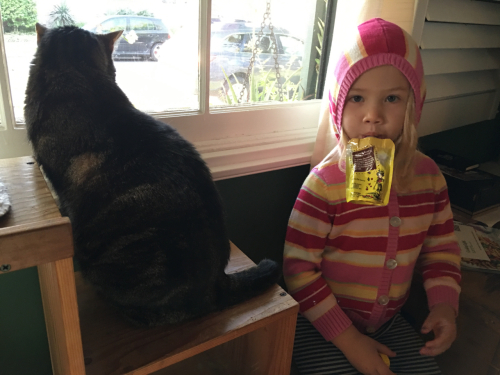 We thought he'd be around for a few more years, Kurt and I both having had 18 and 19 year old cats in our lives. Fifteen is old for a cat, but not nearly old enough for us. Dynamo suffered from kidney disease, which is treatable and we were doing the IV fluids routine for the past few months, then his heart gave out, poor sweet thing.

We are fortunate to be able to call in a vet and do what needed to be done at home. No cold sterile room with dogs howling in the back. Harper was at preschool when it all happened. Easier to tell her after the fact.

Bringing a pet into your life comes with the knowledge that you will need to escort them out of their lives at some point. You are their caretaker and have to make the tough choice. Even when you know it's the right thing to do to avoid suffering and distress on their part, it's so hard.

Dynamo died in his favorite kitty bed in Kurt's lap, with lots of petting from me. After he was gone, the vet left us alone with him for a little while and we just talked about his long life with Dot, remembering when we first met him and his long road trip and his short time with us. We both were so glad he could have his outdoor life again before he died. The picture above at left was taken the day before he died, outside in the sun. We have been in a rental while we remodel our house and haven't let the cats out in our temporary neighborhood. When Kurt texted me this when I was at work, I burst into tears. Dynamo hadn't been outside for 3 months and I was so glad he could do a bit of basking again.

Our house has a hole in it again. I wonder how long it will take me to stop checking under the covers for Big Mo before I put things down on the bed. I miss his wet nose and his concussive head hits. I'm so glad we got to care him, knowing how he cared for Dot. When we told Harper about his death, she thought for a moment then said, "Well, is he going to come back as a shadow?" I hope so, Harper, I hope so.

You will be missed, Dynamo.

Posted at 05:57 AM in animals, Changes, Dynamo and Willoughby, grief | Permalink | Comments (2)