Harper has settled into some phrases in her 4 3/4 years (and she'll say "I'm 4 and 3/4" because she cannot wait to be 5!). My favorite is when she is telling a story and she starts with "One time ago" as in "One time ago, we went to the big trees and I climbed a rock!" or "One time ago, Ethan made me laugh at school."

She says "alligator" for elevator, which is charming, but I know won't last long.

She says "Surprise" for dessert. Which is my unintentional doing. When she was late 1ish and 2ish and eating in a more grown up style, I would say after dinner "Do you want a surprise?" because dessert was a whole new concept. She took that to mean surprise = dessert. Even cuter back then, she would pronounce it "soapy prize". I was hoping that would stick, but alas, no. Now she also days dessert, but still will say while standing in front of the freezer "Papa, do you want a surprise?"

Me: There is no more mac and cheese.

Harper: But I want more!

Me: I know, but there isn't any. You can have more rice or green beans.

This has been another installment of "Things Harper Says."

We let Harper watch YouTube videos of kids playing with toys, unboxing videos, etc. But lately we've turned her on to funny cat videos (ha!) and OK Go videos. Now I am OBSESSED with OK Go. Yes yes, I'm a little late to the party. But man, the work they put into their videos is fantastic. And I will be buying their albums.
Treadmill video √
Weightless video √
This video in particular made me shake my head with wonder at the design and set up. I also love it because it's the ULTIMATE singing while driving video.

Harper's preschool has "Crazy Fun Week" the last week before their short break in August. One of those days is about hair. We did a tame version of that. 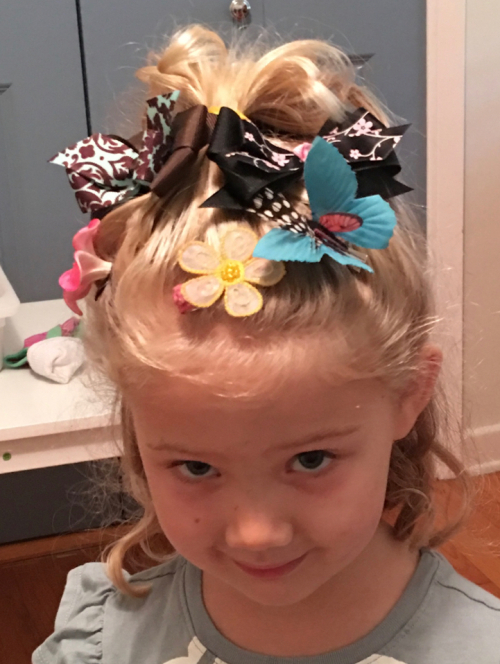 There was swimming and ice cream. 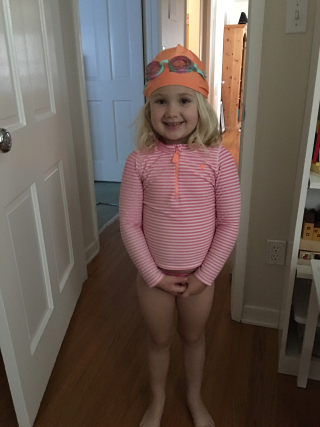 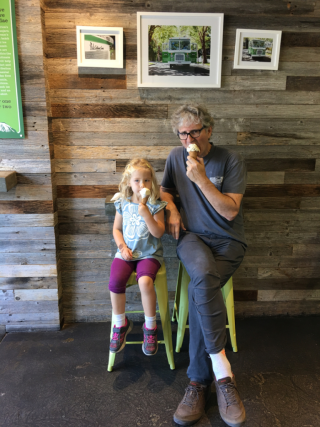 Mama got a new bike. I refer to bikes at Ponies because Kurt bought me a bike for Christmas years ago and had to take me outside to see it, as you would a pony. So I told Harper I got a new pony and what should I name it. She said, without missing a beat, "Twilight Sparkle". DONE. 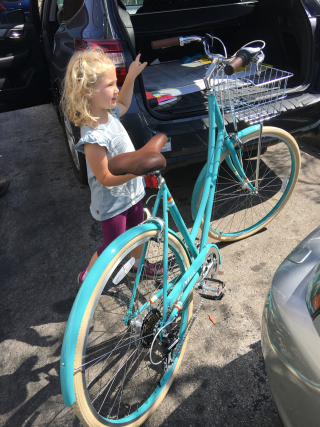 The job I was working on for the last six months ended (YAY!) and the timing was perfect as the next day we got free tickets to Disneyland, thanks to our good friend Sarah (co-creator and co-owner of MomsLA. Also a dear friend since I was 9!) And also lucky for us, Grace has a year pass to Disneyland and the day off from work so she could join us. HOORAY!

Look at us, all fresh on the tram before the day starts! Surfing Goofy was a quick stop to pick up tickets. 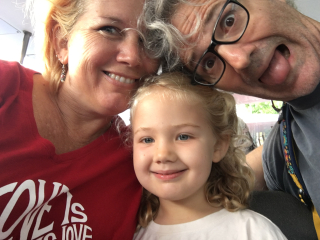 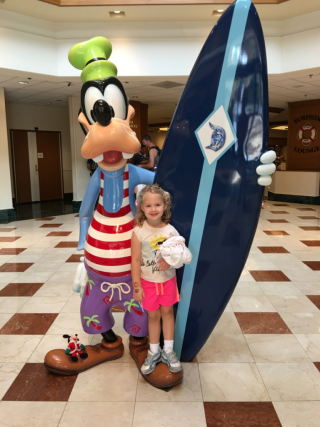 First ride of the day - Storybookland - a nice warm up. Followed up by TEACUPS! OMG Harper loved the teacups. We went twice. 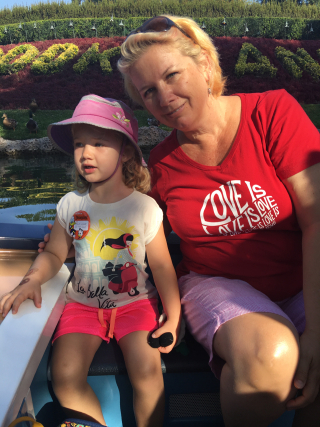 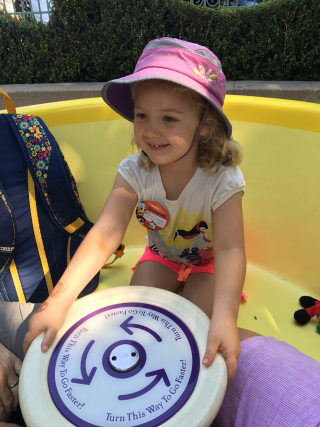 Then on to Dumbo - first the waiting, then the flying. 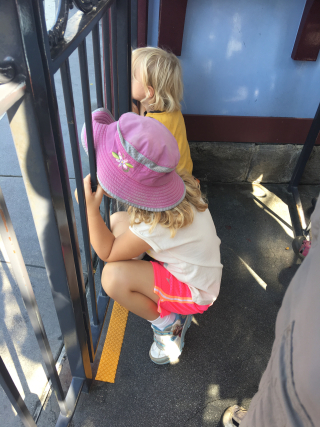 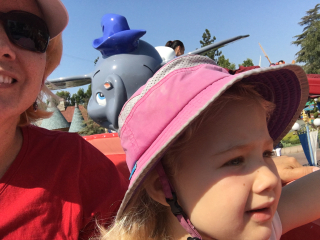 Grace arrived with coffee (She's the best, our Grace!) while we took a break after buying the required ears. Harper put them on for a minute then took them off saying I'm not going to wear this today. Ummmm, today is the BEST day to wear them! Oh well. 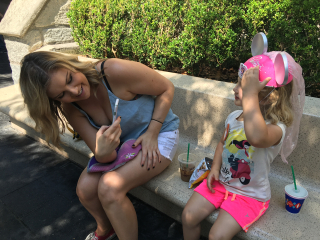 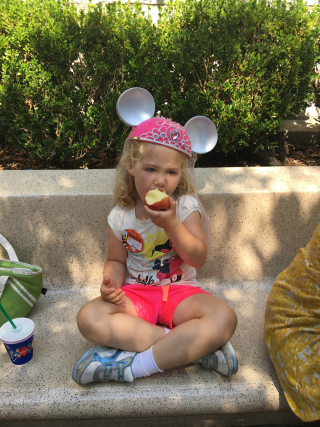 Off to Autopia and Harper helped me drive while we were being stalked by these people. 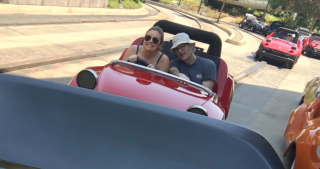 After some Dole Whip in the Tiki Room (the tiki tiki tiki tiki tiki room) - that is some OG Disney, btw - we traumatized Harper with a ride on Pirates of the Caribbean. It's not a trip to the Magic Kingdom without scaring the crap out of your daughter. She recovered, we had some lunch then climbed the Swiss Family Robinson Tarzan Treehouse. Kurt took her once, then I took her through and she wanted to go back up and out the opposite way. That's a little awkward, but hey, I figured I owed her after the whole Pirate-Nightmares-For-The-Rest-of-Her-Life situation. 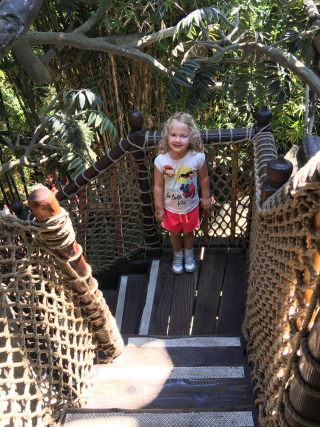 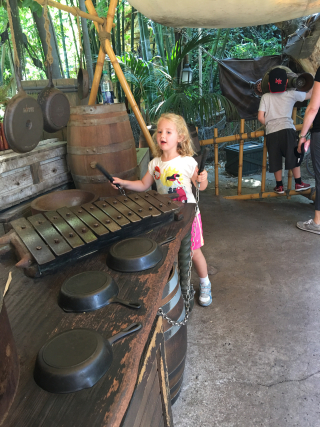 We met up with Sarah, our Disney benefactor and rested to chit chat for a few minute outside Jungle Cruise (which was closed for a short while). Harper asked if she could get a spray fan, something she'd seen others carrying around, and we said yes. Oh did I mention it was about 92 degrees F? (That's 33 C to everyone else in the world). It was a welcome and practical purchase. The best part though, was I unwrapped the strap and Harper looked at it and said, "You WEAR it?"  Like that just blew her mind. 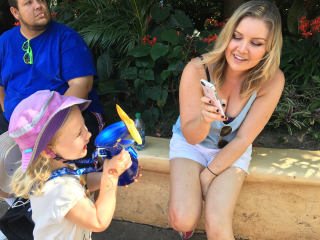 The Matterhorn, of course. 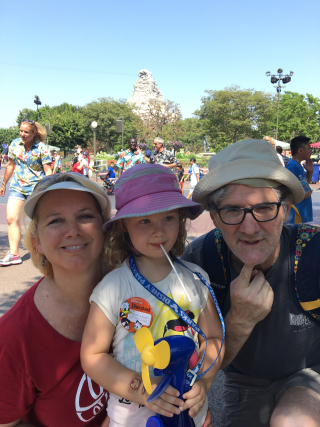 A churro of course. 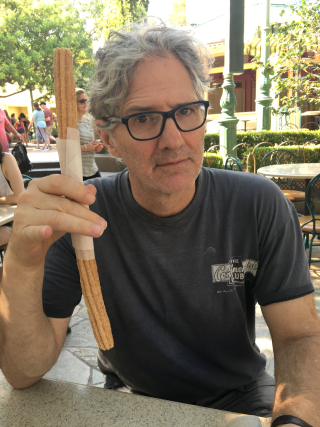 At this point we had crossed over into California Adventure and went on Harper's favorite ride The Clam Ride aka Ariel's Undersea Adventure. Then we rested, had a beer and a snack. Then off to the Ferris Wheel. Apparently we were too tired and too hot to take any more pictures other than one from the giant Ferris Wheel and one of me and Harper on Jumping Jellyfish. Funny thing - Harper doesn't like the Dark Pirates ride but heights? Not a problem. 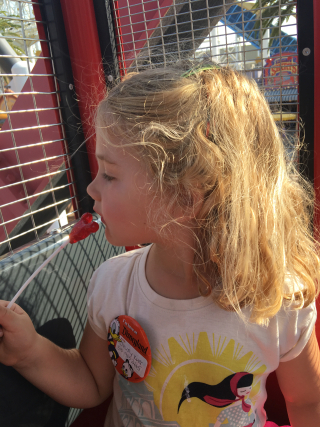 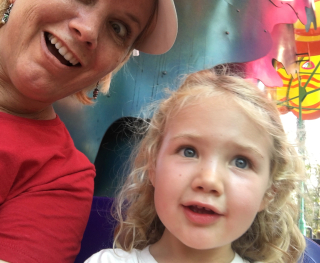 After that, a ride on the rockets with Papa and then we scooted out to avoid the parade. Dinner near the tram stop, then back on the tram.

We had bought one of these ridiculous balloons. Truly, they are a menace. But finally Kurt found the perfect use for it. 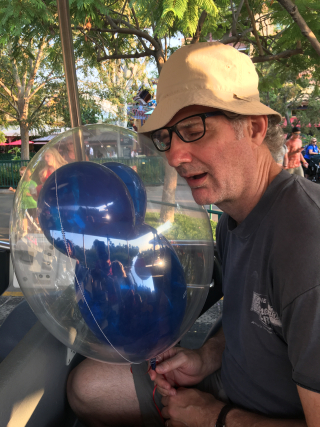 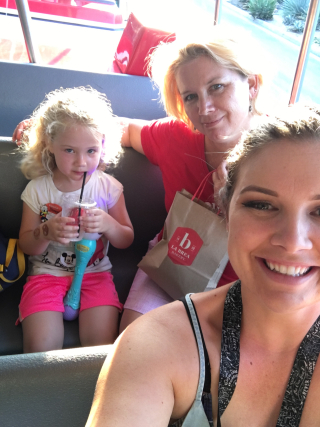 One selfie is enough Grace! 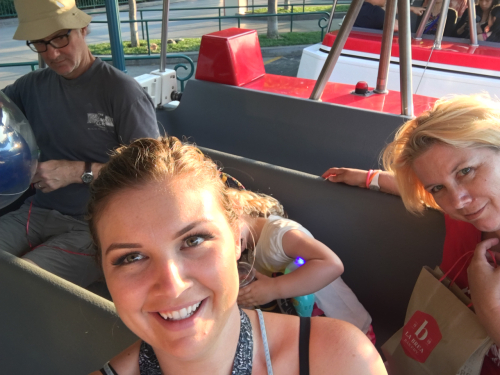 Thanks to Sarah for making it happen! And to Grace for sacrificing fun grown-up rides for life with a 4 year old at Disneyland! Great day.

Summer fun over Labor Day weekend. The last of our summer mini vacation. 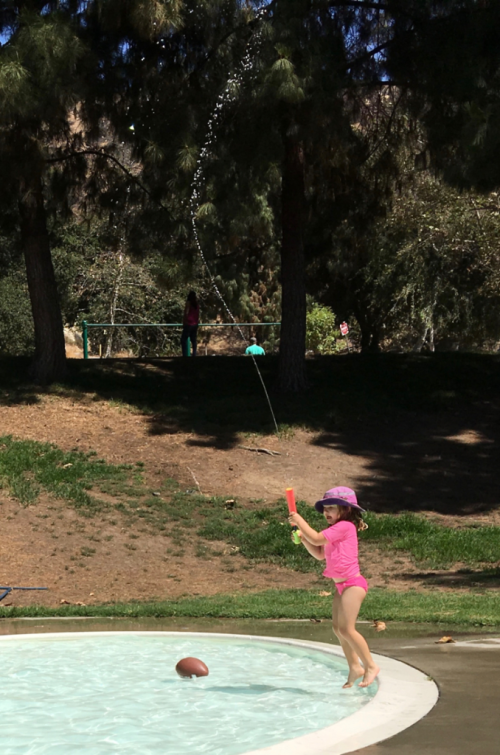