Harper started shotokan karate in late spring this year. We were looking for something sporty that wasn't soccer (dear god, I'm putting off soccer as long as I can) and when offered karate, she said yes. With advice from preschool parent friends, we started at the Culver City Rec Center with Sensei John. Turned out there were kids in her class from preschool - excellent! After a short while, Kurt decided he wanted to join in. Both started as white belts, as you do. Harper tested up to Orange a few months ago and two weeks ago, they both took tests. Last night - ta da! Both got new belt colors! 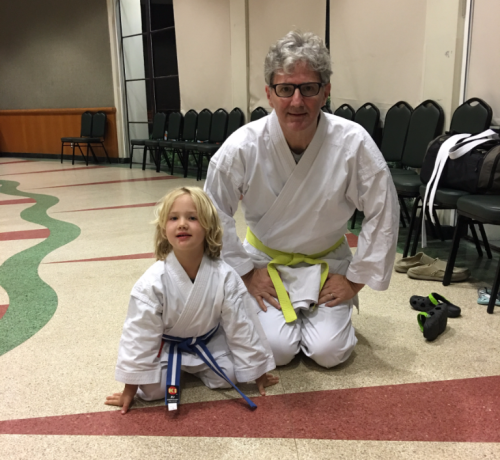 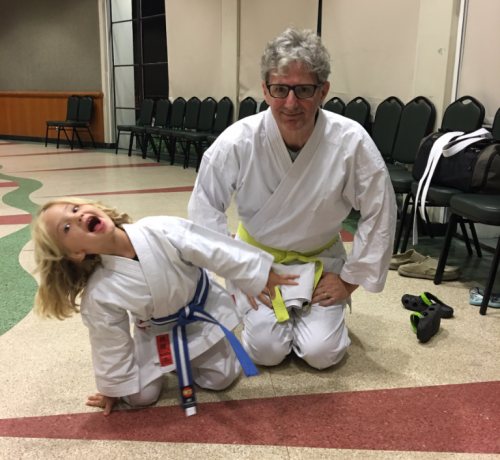 Grief and Growing Up

My sister Jen's father John died early this morning. He was my mom's first husband, they had my sister, they got divorced, then my mom married my dad and they had me. My sister's dad got remarried and they had four kids, none of whom are related to me. (Are you with me on the super branchy family forest?) Anyway, I know them all, we are not family but we are family. My sister's kids, my niece and nephew, came down last weekend to visit and say their goodbyes.

Jen died nine and a half years ago. Feels like a week ago. The day she died, I had to call her dad and tell him the horrible news. This after calling my mom to tell her. How did I do that? How did I have the strength? How does anyone.

I heard that Jen's dad was on hospice and near death a few weeks before and have been kind of wrecked since then. I didn't know him very well, we weren't close, but I've known him my whole life, he's my sister's dad. But it shines a bright light on the grief and loss of my sister. And I feel so much for her family as their mother died about ten years ago, Jen, their oldest sister, died nine years ago and now their dad.

In "By The Shores of Silver Lake" by Laura Ingalls Wilder, the book starts a few years after "Plum Creek" ends, and it's a brutal beginning. The family is in debt, never recovering from the locusts, years earlier, oldest sister Mary almost died and now she's blind, they have to sell out and move west and just before they do, their loyal dog dies. The chapter in which he dies is called "Grown Up" and Laura realizes that she, at 13, and small for her age, has to be grown up, has to take on a lot of responsibility. The very first time I read this book I sobbed. The last time I read it, about a week ago, I sobbed.

My stepfather, Jack, was in the hospital at death's door when my sister died. My mom was going through a lot with that. My sister had cancer and was going through 2nd rounds of treatment but her death came as a surprise. (We are 99% sure it was a blood clot.) The sound of my niece's voice on the phone that morning will haunt me forever. Then my phone calls to my mom and Jen's dad I barely remember except that I couldn't get a hold of either of them for a while and the waiting was excruciating.

I flew up to northern California that morning and took charge as everyone was shell-schocked, including myself, but it was easiest to be busy and do what I do best - organize, be a producer. I was really waiting for my mom to arrive so that she would be in charge and know what to do. This was a horrible time and I just wanted my mommy. When she did arrive, a day or so later (I can't even remember) she was not really my mommy. She was a mom, devastated and blown apart by the sudden loss of her daughter. (On top of what we thought might be the eminent death of her husband of 25 years.) Mostly I remember that she slept a lot.

It was my time to be grown up. I had to be the mom and dad and sister and auntie and daughter to everyone. I saw a need and was so grateful I could be all that. In that horrible time it seemed like a gift I could give. In those days and weeks, I took it all on as best I could, a box of Kleenex with my name in big letters by my side.

Grief can transform you into a person you never thought you could be.