I know I know, it's almost February, but the year still feels somewhat new, though the sheen is wearing off.

I'm writing this on January 30 to publish on the 31st, right when the BlueBloodRedSuperMoon is happening. I'll be standing outside looking up going "cool!" (Unless it's cloudy, then I'll be saying "poop!")

A couple of posts ago I talked about resolutions and how I didn't want to go on about them at such an obvious time - the beginning of January. But I can talk about them now as I've already made progress!

First of all, I decided that since I have so many goals, it was best to break them down into pieces and not be overwhelmed by giant insurmountable seeming plans. Also, I didn't start them all in January, that felt like toooo much to even consider. So my plans sort of look like this:

--do 5 push ups a day (DONE! Except I missed 4 days due to illness and one brain fart and since there are 2 more days in the month, I promise I'll do them.)

--added many more days of walking for exercise, including the occasional burst of jogging or stair steps into the walks and better stretches at the end.

--floss Monday through Friday (DONE!), get the weekends off of flossing (this has worked for me in the past and I got off track lately so am back on it.)

--work on my script 2x a week for an hour

--strength work. I got stretchy fitness bands for Christmas and will add those in to my work out schedule

--All of the above with variations to the workouts as my schedule allows.

--All of the above

The overall weight loss goal is 40 pounds. I'm already down eight. I signed up with Noom (saw it on Instagram!) and it's been helpful to get me focused. My biggest changes, aside from mindset about eating in general and looking ahead to what I want, is to only drink one night a week and to stop snacking after dinner. So far so good. And taking it two pounds a week at a time and only looking at eight pounds to lose each month makes it feel much more doable. Now, I had started at such a big number that, while I'm proud of getting these eight off, there is a ways to go before I can even really feel a difference. I don't look different in the mirror and my clothes feel mostly the same EXCEPT - I have a down vest that was tight if I zipped it all the way up, but I zipped it up the other day and...not so tight! Slow and steady...

Well done me in January, I have earned my reward of new work out clothes and will purchase them tomorrow.

Then FOCUS on February to achieve February's goals.

I have to stop writing about it now as it's making me TWITCHY. Less talking, more action. Maybe at the end of February when I check in I'll talk about why I chose these particular goals. And there are plenty of other goals I'm working on too. It's going to be a BUSY AWESOME YEAR.

There is a pot of gold at the top of the mountain and I'm climbing.

We were walking into the school gate yesterday and she said:

I got my hair cut a little shorter and had lowlights put in so that it looks more like how my real hair color looks. It's no longer all super blonde as you see in my picture here, I'm working on growing out my real hair color for a while a) for a change up and b) to make one less thing to have to worry about if I'm going to be working a million hours on a new job. (Which I should be this year.)

In one sentence she tapped into all my fears and sensitive spots about being an older, new (ish) mom. Yeah, I'm a 51 year old menopausal woman with a six year old. And man, some days I feel old and YES HARPER, YOU COULD BE MY GRAND DAUGHTER SHUT UP! In real life two people have asked if I was her grandmother. Oooof. Knife to the heart as I already feel weird about being this age and having kids. Weird as I feel like I was too chicken to have kids earlier in our marriage (it was 10 years before we had Harper), weird like I have regrets for having her so late and then only having one. It's complicated.

And it all comes splatting me in the face with a comment about my hairstyle. Thanks for keeping it real, Harper. 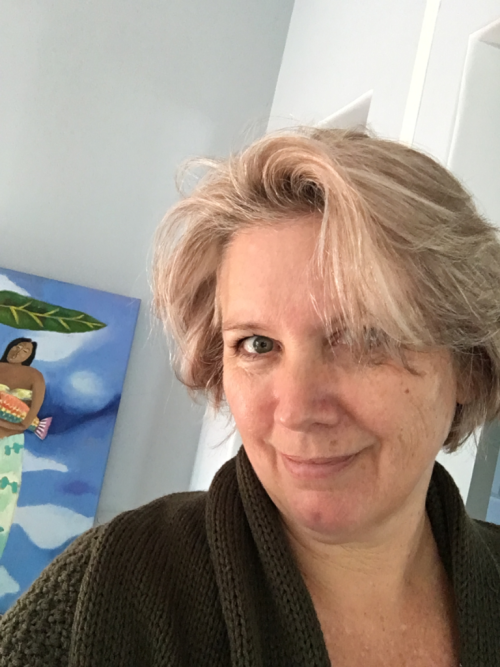 Harper has a t-shirt that says a bunch of positive things on it and I was reading it to her and one of the words was "Bold".

Me -  Yes you are, you are not afraid to try new things or--

A few weeks later I'm at my desk, writing in my journal and she asked what I was doing, what this book was.

I about fell on the floor laughing so hard.

It was a good few months for learning about homonyms.

Seems like it was just November. December went by in a flash. Finished a job, then Thanksgiving, then Harper birthday then family visits then a trip to Seattle, home for Christmas and New Year and WHEW.

2017 was a good good year. I'll be honest and say the first half was much better than the 2nd! Because of course it was ITALY 2017 in the spring. My long planned birthday gift to myself. It turned out better and more wonderful than I even imagined it would. Here is an image from one of our last days in Lucca. Was was so sad to be saying goodbye to such a lovely town and an amazing experience. 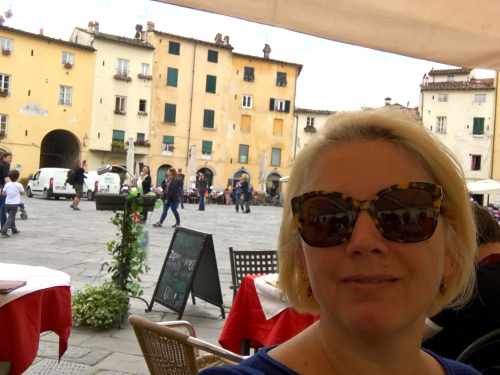 We got home to LA and LA had not changed at all and stood out as dull and full of concrete in contrast. I know I know, not fair to compare Tuscany to LA. But it really made me sit down and consider what the next 5, 10, 20, ?? years might look like. What do I want them to look like? I made a 5 year plan that will be a huge help for the long term goals. But for our distant plans, we are still working on them. Questions like: are we going to live in LA until we die? Are we going to live in this house until we die? All very valid and very REAL questions. Intense questions. Questions we can't answer just at the moment and that's fine. Just as long as they are out there and we are considering.

As for 2018 - there are goals. Weekly goals, monthly goals, yearly goals. But all of that is predictable and unsurprising so I won't go into that until February as I want to walk my talk and then I'll report back. One goal I will share is to do 5 push ups a day for the month of January. I know, I know, sounds lame and easy. But for me, 5 push ups are hard. And PS I have to do them on my knees because my upper body strength is not great. Also - it's nice to make a goal that is reasonable and totally doable. No extra expense, time or equipment needed. I'll keep you posted.

I hope your 2018 is full of peace and hope and prosperity and joy and good health.