Who would have thought that I would acquire two new pen pals in this day and age? One of them is even of the "write an actual letter, put a stamp on it and send via US Mail" type. And I love it.

The first new pen pal is of the modern variety - email. She is the wife of a dear old friend and classmate from Seabury. They had their first baby this year and reached out to me to ask questions and get ideas. I had a blast answering a list of "what is really important for new babies?" email. Way better than a Buzzfeed quiz, let me tell you. (BTW the answer is really: "not much!") Since their baby was born we have email pictures and notes back and forth almost weekly. And not just "hey here's a cute baby pic" but actual paragraphs of news and updates and getting-to-know-you type stuff. It took me a while to recognize what I had: A New Pen Pal. Well, a virtual pen pal, an email pal? An EPal? (Sounds like a dotcom that went bust in 2000.) Anyway, a new friend. (They live in NYC.)

The more recent pen pal is a friend I've known from blog life for about eight years. He is the most modern of communications people that I know, an early adopter of e things, but mainly social media. I learn a lot from him and consult often about how to approach things online. Smart guy. Recently he decided to try writing actual letters to people instead of just emailing or tweeting back. My understanding is he wanted to have the focused experience of communicating with one person at a time in a manner that requires time and effort. He bought a manual typewriter to accomplish just that and posted his PO Box address for anyone who wanted to write. Well, you know me. This just started in November and will take a bit longer to get rolling. I sent the first note, he responded with one typed letter and I've written back. I imagine his PO box will be full for a while and he'll be busy strengthening his typing muscles, responding to those. The funniest part? He lives in LA. I think I've seen him IRL about five times.

The arrival of the mail carrier is now more exciting than before. Will I get an actual letter today? (The holidays are good for this kind of thing, but with the advent of "Holiday cards untouched by human hands" it's lost its magic. Just email me a picture if you aren't going to write anything on the damn card! Bah humbug.) Even my email inbox has gotten dull -- mostly newsletters and blog post updates. Hardly any personal stuff any more. Facebook has slowed that down a lot, people just post a thought and hope you see it. I hardly see it.

New Pen Pals in 2014. Who'd have thought? I'm pleased as punch and must rush out and buy more stationery...

PS The image of the stamped letter from 1898 is to a person whose name is alarmingly similar to my family name from a few generations ago and I grew up in Spreckelsville on Maui. Must research into Mr. Lowrie a bit today.

I Want To Be Pen-Pals With Chris Hardwick

When I say I want to be pen pals with Chris Hardwick, I mean it. I want to be actual old school, write-real-letters, put-a-stamp-on-the-envelope-and-mail-it type pen pals. Why so Y2K? With the 700 different ways to communicate today, creating a relationship with a stranger is almost harder. Emails/tweets/FB posts/texts happen so fast there is no time to do anything between communications. When you write actual letters, actual time goes by. So the letters can be long and full of getting-to-know-you content as well as what-I-did-these-last-few-weeks info. When you get a letter in the mail, there isn't the same pressure to sit down and respond right that second. You can take your time. (Clearly I need to write a whole blog post about what it means to be pen pals.)

The other reason I want to be actual-write-a-letter pen-pals is that I like Mr. Hardwick. I don't want to stalk him, I don't want to be his girlfriend, I don't want to hang out at his house or have coffee with him every week. (well okay, once would be cool, but that would be after lots of writing.) As mentioned, with the internets and all, one could really try to bombard a guy with requests and end up being annoying and just another buzzing fly. That's not my style. I'm a well brought up person with manners and respect. I just want to be friends, pals, pen pals.

But why in the world would he want to be pen pals with me?

I'm a nerd, ask anyone! We bought Star Wars art for Harper's room. I had the last Harry Potter books delivered on the release dates and read them almost straight through. We got a "Stormpooper" hat as a baby gift and Harper actually wore it often, not just for a photo op. In high school I had a major life epiphany ("I can work in the movies!") while watching Indiana Jones and the Temple of Doom. (Double nerd points-I was dressed in khakis, and wore a gun belt and fedora. Thank you 80's Banana Republic!) I saw Jeff Goldblum at the Cinerama Dome in the 90's and told him I loved Tenspeed and Brownshoe.

Here's where I go over the top with girl-nerd cred:

I had my mom sew me a sun bonnet so I could wear it while reading my Little House On The Prairie books. (THE TV SHOW IS NOT THE SAME!) And I still have that bonnet, btw.

Okay, I'll admit I'm not the nerdiest of nerds, especially these days. I'm more nerd/dork (Nerk? Dord?). I did play D&D in high school, but I never go into comic books. I've seen Blade Runner once about ten years ago and didn't really get why people go ape-shit for it. (I guess I missed that window.) When I imagine going to Comic-Con, I can only picture myself dressing up as Super Martian Robot Girl because we watch way too much Gabba at our house.

But I'm a huge fan of Chris Hardwick, self styled Nerdist himself, so that makes me a huge nerd again and I love it. I have enjoyed his stand up and his shows for a while now, loving "Talking Dead", though I missed "Talking Bad" because we were so far behind on Breaking Bad. I'm a huge @Midnight fan. Huge.

And my nerd crush for Mr. Hardwick was solidified on one episode of @Midnight when he referenced the Godzilla cartoon from the 70s/80s, specifically mentioning Godzuki, then sang the theme song!! OMG. Mad mad crush.

So now I want to be pen pals with Mr. Hardwick. If only I had the guts to ask him when I met him a few weeks ago at a Walking Dead event. He was so kind to laugh when I gushed about his Godzuki comments and even kinder to take a photo. (OMG, I totally forgot to tell him I worked on the 1998 Godzilla! Wait, maybe that would be a deal breaker...) 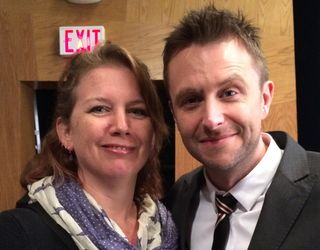 I would like to know more about him. How did he end up staying so nice in a world (entertainment) of often not-nice? I admire his incredible work ethic and drive, how does he keep that going? He inspires me to work harder and to follow my dreams. We could talk a bit about grief as he's recently had a death in the family. I know a bit about that. We probably have more in common than it seems at first glance. (Well, don't we all?)

Chris Hardwick seems like a hail-fellow-well-met and I would not let him down in our pen-palship.