Tuesday night was Green Day at the Forum.

I'll be honest. I cried. More than once. I've never been to a concert this big (approx. 18,000 people) and I've never been to a proper "rock concert." The hardest concert I've been is, uh....um....The Police? This was new. But walking in I knew it wasn't going to be some mosh pit stage diving insanity. There were tons of people our age and older and tons of people our age and older with their kids -- young kids, 8, 9, 10 year olds. That was awesome to see. Green Day has been around for 22 years so it makes sense.

We got to our seats just as the opening band, Franz Ferdinand was finishing their short set. They ended with a scottish pipes and drummer group on stage. Then the stage was reset and shortly after 9pm Green Day walked from the very back of the floor area to the stage, along the sides. They started with 21st Century Breakdown, which set me off crying immediately, along with jumping up and down and waving my arms around, like you do. Then they played Know Your Enemy and that was great. 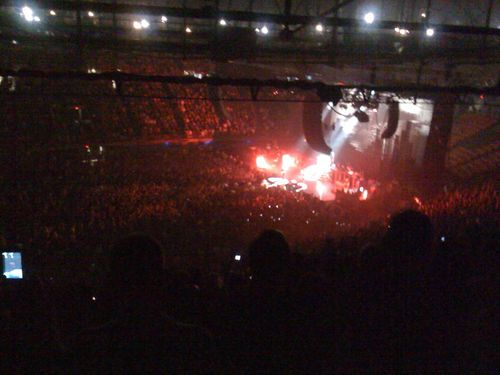 Everyone was on their feet the whole time and we had binoculars to watch up close (thanks Debra and Chris!). We lucked out on seats, not in their location so much (you can see how high/far we were) but because there were just two seats together in that particular spot. Even though we were far, I didn't feel that far away from the show, because the the entire place is the show, the people around you, the energy, the joy, the noise, that is all part of the show and it was tremendous.

For a perfect example, they started the song Boulevard of Broken Dreams, which is slower song and Billie Joe (the lead singer for you non Green Day fans) sang the first line and then the crowd took over. Everyone (including me) sang almost the whole first part of the song. Billie Joe just stood there, holding the microphone up, then just listened, then bowed down, then walked back to the middle of the stage and got on his knees, listening. It was a really cool, dare I say, powerful moment. Thousands of people singing a song about loneliness, together. Phenomenal.

When Basket Case started, the crowd went wild, but not more than the guy in front of us. Oh man. There were two kids in front of us, 15 maybe? The taller one practically went into convulsions, putting his hands to his face and bending over yelling "Oh my god! Oh my god!" (and I couldn't hear the rest.) "Stoked" doesn't seem to come anywhere near to covering what he felt. I tapped him on the shoulder and handed him the binoculars. He was beyond crazy happy. He handed them back after a short time but I then handed them to his friend, who watched for a few minutes then handed them back to me, also stoked. I know they probably wouldn't like to hear it but they were adorable.

When the opening drums/bass riff to Longview started, the kid went into convulsions again and I wished he were at the front of the stage because for Longview, Billie Joe said "Who knows the words to this song? Seriously, who knows all the words?" He then picked out a kid from the front of the floor gang and had him pulled up on stage. The kid was maybe 14 or 15 and hugged Billie Joe first off. Then Billie Joe handed him the mic and let the kid rip. And the kid ripped! He sang that song and ran around the stage like he'd been doing it his whole life. Oh man. It was great to have the binoculars then so you could see how crazy happy the kid was. When the song ended, Billie Joe had him stage dive into the crowd. Awesome!

Later he did a similar thing with Jesus of Suburbia, saying to the crowd "Who can play the guitar?" and he pulled a 21 year old guy with long hair up to play on the song. That guy also worked that stage like he had been on tour for ages. But looking close with the binoculars, you could tell it was not pre planned or anything. That guy was over the moon. He also got to stage dive off.

The show was three hours total, which amazed me because it all just flew by. Billie Joe talked a lot between songs, yelling at the crowd to get up, get your hands up. Saying that we are all here right now, there are no tvs, no computers no cell phones -- just this moment right now. This moment of hope. (No really, that's what he said!) He talked about how awesome California is and how happy they were to be here. In fact, after the crowd sang the whole first part of Boulevard of Broken Dreams, he said, and it sounded and looked like he was pretty stoked, "That's Los Angeles!" Later he told a funny story about being on Sunset Blvd, outside a bar, arguing with his wife on the cell phone one Friday night last year and a guy driving by yelled "Hey Billie Joe! Fuck You! Fuck Green Day!" Then the guy's car was stopped in Friday night Sunset Blvd traffic and Billie Joe said to his wife "Can you hang on a second?" and then he ran over to the car, dove through the window and started beating the guy up. Then he dove back out the window and into the bar and finished the call with his wife, saying "I love you." I can't quite explain why, but I love that story because it is SO LA.

The bass player, Mike Dirnt, ran around the stage a lot, but generally stayed pretty low key. I loved it when he would walk out onto the small catwalk part of the stage into the crowd and would touch the end of his base to people's heads and hands, like he was anointing them with the music. Tre Cool is just kind of a spaz, throwing his drumsticks behind him after every two or three songs. He would occasionally get up and run around the stage. Next to his drum kit was a small table with a fan and a plastic drink cup with paper umbrella. And Billie Joe -- just all over the place, yelling and swearing and tearing it up, but in such a positive, funny, good spirit.

We had earplugs, but I couldn't use them the whole time, I would take them out and put them back in. My ears are still ringing a bit, but it was worth it. The music wasn't so bad, it was the screaming crowd that really hurt the eardrums!

They did the usual "good night!" and then came back for another 40 minutes. The encore started with American Idiot (gawds I love that song) and ended with just Billie Joe on an acoustic guitar playing three slower songs, ending in Good Riddance. Now, Good Riddance will make me cry EVERY TIME because of one of the most touching moments I remember on tv. It was when ER was good in the 90's and Jeanie Boulet was friends with the chief surgeon's son who was 12 and had cancer. The kid listened to Green Day and when he died, she sang Good Riddance a capella at his service. It was mind blowingly moving. (Yes, I am a pop culture junkie, FYI.) Add to that my sister dying of cancer and damn, I'm reduced to a puddle when that quiet guitar starts up.

This was how it looked for those last slow songs at the end:

Green Day has been saving my soul this year. I have hooked into their music because it allows me to express anger and fear and rage in a "healthy way" while I drive along, yelling the lyrics, pounding the steering wheel. I mentioned this to a friend recently and he asked "what are you angry about?" and without hesitation I said "My sister dying." Quite frankly, I'm fucking pissed. So Green Day has helped me, continues to help me express myself out loud. I don't know how I'd be doing it otherwise.

Another turning point, a fork stuck in the road
Time grabs you by the wrist, directs you where to go
So make the best of this test, and don't ask why
It's not a question, but a lesson learned in time

It's something unpredictable, but in the end it's right.
I hope you had the time of your life.

So take the photographs, and still frames in your mind
Hang it on a shelf in good health and good time
Tattoos of memories and dead skin on trial
For what it's worth it was worth all the while

It's something unpredictable, but in the end it's right.
I hope you had the time of your life.

I had a great time, Green Day, thank you. Thank you for saving my soul. (There's me telling the world (well, Facebook and Twitter) how happy I was after the concert. All photos by Kurt Frey taken on his iphone. Kurt was a good sport for going with me!)