When you are married to a Frey, particularly one from the Metroplex in Texas, you have to know you will be watching Cowboys football most weekends. Today is more than just a Cowboys game. Today is a double header Frey Rivalry day. Freyvalry, if you will.  (Okay, you don't have to). Cowboys vs. Seattle Seahawks (where Kurt's brother lives) and later, U of Texas (Hook 'em horns!) vs. Texas A&M (Gig 'em Aggies!). Kurt and his mom both attended UT (Y'all Fight!) and Kurt's bro went to A&M.  See how it is?  In between we are going to eat at a nearby restaurant. So who wins?  ME!

While the Cowboys have been kicking Seahawk tail, I have been making a new blog.  Check it!
Safety Graphic Fun

It's a daily dose of Safety Graphics. I love me some safety graphics, they are so brutal and kooky. I want to know who makes these wacky things.
Off for dinner soon.
I hope your holidays are full of love and family and friends and pumpkin pie.

Surprised By The Olympics

Nastia Luikin and Shawn Johnson won gold and silver medals, respectively, in women's individual all-around gymnastics" at the Olympics in Beijing.  (In case you weren't paying attention.)  This is a big deal for US gymnastics and the first time it's ever happened. Yang Yilin of China won bronze.

Am I *that* into gymnastics?  Not at all.
We've been tivo-ing stuff and watching bits and bobs of it. I watched Michael Phelps win a few, but then, honestly, got a bit bored. He's awesome, he's going to win. Moving on. It's not like watching Tiger Woods because he occasionally hits bad shots and the fun is to see how he's going to win anyway. Michael Phelps just goes fast from start to finish and kicks everyone's butt. More power to him. We've watched a few other things, women's beach volleyball, some equestrian (with Kurt's mom who LOVES the equestrian events) and if there's badminton on, we'll watch about a minute of it because it's amusing.
So I was watched the women's gymnastics (even though I already knew the outcome, but didn't care) and am always amazed at what these girls can do. It's mind blowing, really. When it came down to the floor exercise, Nastia was second to last, Shawn would go last. Nastia was in gold medal position and Shawn in bronze. Nastia finished well, pretty secure in her gold, hugging her dad (who is her coach and also a gold medal winner in gymnastics -- no pressure!) then Shawn went and she did a great routine to clinch silver. But what got me choked up, surprisingly, was when Shawn finished and ran down to her coach and teammates and had that look of pure joy and relief, she was going to cry happy tears at being done with it and doing a GREAT job. I recognized that look and feeling. Um, no, I don't mean I can relate to an Olympic athlete, but when we ran the Honolulu Marathon in 2001, I started bawling at mile 26 (there is .2 to go from there). I was overwhelmed by the event, the culmination of six months of training, of being in my original hometown, of being with Kurt and our two team mates. We did it! That's the feeling I recognized and it was sweet and surprisingly moving. 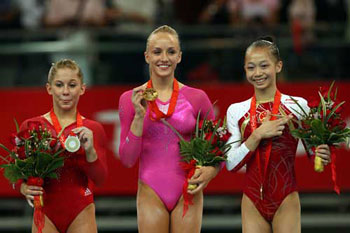 Track and field is getting going this weekend.  Can't WAIT for the hammer throw!

Found this while browsing through olympic websites. 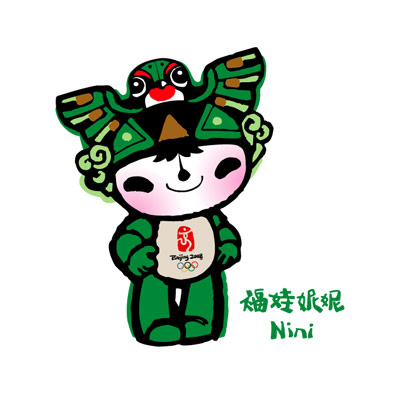 Every spring and summer, the children of Beijing have flown beautiful kites on the currents of wind that blow through the capital. Among the kite designs, the golden-winged swallow is traditionally one of the most popular. Nini's figure is drawn from this grand tradition of flying designs. Her golden wings symbolize the infinite sky and spread good-luck as a blessing wherever she flies. Swallow is also pronounced "yan" in Chinese, and Yanjing is what Beijing was called as an ancient capital city. Among Fuwa, Nini is as innocent and joyful as a swallow. She is strong in gymnastics and represents the green Olympic ring.

I do generally spread good luck as a blessing wherever I fly, just not these past few weeks.

Dakar: We Let The Terrorists Win

The Dakar Rally 2008 has been cancelled due to terrorism. 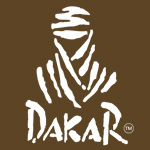 
After different exchanges with the French government - in particular the Ministry for Foreign Affairs, and based on their firm recommendations, the organisers of the Dakar have taken the decision to cancel the 2008 edition of the rally, scheduled from the 5th to the 20th of January between Lisbon and Senegal’s capital.

Based on the current international political tension and the murder of four French tourists last 24th of December linked to a branch of Al-Qaeda in Islamic Maghreb, but also and mainly the direct threats launched directly against the race by terrorist organisations, no other decision but the cancellation of the sporting event could be taken by A.S.O.

I don't want anyone to get killed by terrorists, but it really bums me out that this race is cancelled because of the potential threat.

I first learned about Dakar in January 2003 when Kurt and I were on our honeymoon in Italy. We had a tv in some of our rooms, but most stations were in Italian (which we don't speak) but we could watch either Italian MTV or Eurosport which was in English. (The Queen's English of course.) The two major sporting events they were following in January were Dakar 2003 and the World Biathlon championships. Do you know what Biathlon is? It is a race where you cross-country ski with a rifle on your back, then stop at targets along the way and shoot. Skiing and shooting, how crazy cool is that? It started as military training in Norway in the 1880s.

But then there was Dakar which is one wacky race. It starts in Lisbon (used to start in Paris) and goes through Northern Africa and ends in Dakar 2 weeks and 5500 miles later. There are three kinds of entries: Motorcycles, Cars and Trucks. The trucks are crazy. Look: 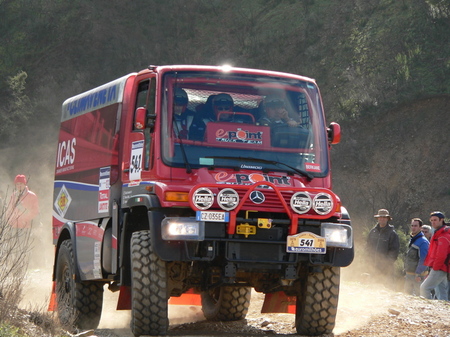 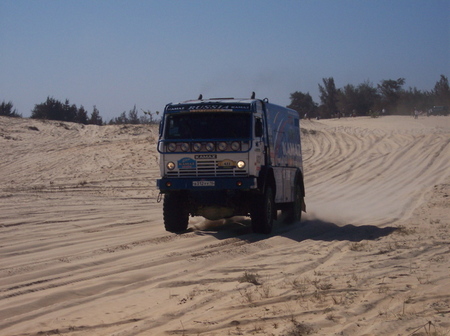 It used to be just be motos and cars, but then the support trucks started their own races to get to the next check points and soon it became an entry. The Russians usually kick ass in the truck event.